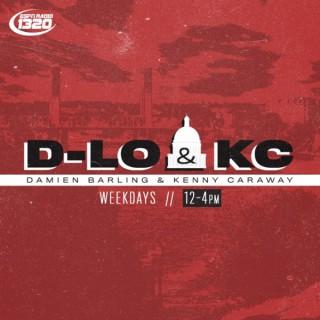 Search for episodes from D-Lo & KC with a specific topic:

Jason Jones, The Athletic Kings fans were the talk of NBA Twitter this weekend all because… we were happy! The policing of fans behavior is bordering on comical. Shoutout to the many members of the media who pointed out the playoff drought as if it had escaped our mind somehow. In actually basketball news, Keegan Murray and Keon Ellis were to bright spots this weekend. Plus, Kings getting praise for Huerter deal, how long will the Kyrie/KD saga drag out, and the heartbreak of Brittney Griner

NBA & Culture writer for The Athletic, Jason Jones joined the guys to talk Keegan Murray, summer league and much more.

Kings fans were the talk of the town over the weekend, the guys talk about Keegan Murray, Keon Ellis and much more during the first hour.

During this hour the guys take calls from listeners on the Kings, we play a clip of Young D-Lo interviewing Mase, the Kyrie Irving rumors and much more.

The guys spend hour four talking about the praise the Kings have gotten for the Kevin Huerter deal, the two guard spot and then are  joined by Jason Jones.

Have the Kings had a good offseason?

The guys spend this brief segment talking about the offseason the Kings have had so far.

"You Guys Are Like 'I Just Wanna Get Laid"

Matt George, Locked on Kings & ABC 10 Trysta Krick, BetMGM Tonight Kyle Madson, 957 The Game James Ham, 1320 Kings Insider & Kings Beat As free agency signing continue to roll in, what's next for the Sacramento Kings. We know Malik Monk will join Sacramento on a 2 year, $19 million deal but what else will Monte McNair do? Is this is it? Does the off season consist of the additions of Malik Monk and Keegan Murray and nothing else. As exciting as free agency is, has anything really impactful happened? Plus, is the KD, Kyrie mess in Brooklyn holding up potential trades around the league?

Locked on Kings podcast host, Matt George joined D-Lo & KC to talk about the Kings trading for Kevin Huerter, who he thinks could start at the 2 guard spot and more on the Kings.

BetMGM Tonight host, Trysta Krick joined the guys to talk about the moves the Blazers made, what the Kings have done and more.

957 The Game's Kyle Madson joined the guys to talk about the Warriors losing some of their role players, other free agent news and more.

The guys spend hour one talking about the Kings trading for Kevin Huerter and are then joined by Matt George for a Kings conversation.

During this hour the guys take calls from listeners on the Kings, talk about the Rudy Gobert trade, the Brian Windhorst clip from this morning and much more on the Kings.

ESPN 1320 Kings Insider, James Ham joined the guys to talk about the recent moves the Kings have made, the fact that they can't move their first round picks due to the stepien rule, who has the best deal for Donovan Mitchell and much more on the Kings.

Do the Kings have a direction now?

The guys discuss whether the recent Kings moves show that they finally have a clear direction.

NBA Free Agency will begin during todays show and news of various moves will likely leak out through the day. With Donte DiVincenzo gone what will that mean for Monte McNair approach? What's the bigger concern - a starting 2? Starting 3? Trading Harrison? Trading Richaun? Are you losing confidence in Monte McNair? Could a Bogi reunion be in the future? Could a Monk, Fox reunion be on the horizon. We've got everything you'll need as free agency begins and will bring you all the news has it happens.

D-Lo & KC spend hour one talking about Kevin Durant requesting a trade out of Brooklyn, the teams that are reported to be in on him, take calls from listeners on the Kings and so much more.

The guys spend the third hour talking about KC's Kings hypothetical, Jalen Brunson, if they'd rather make a deal with Atlanta or Philadelphia and much more.

The guys spend the final hour talking about Malik Monk coming to the Kings, all the other free agent news that broke and much more pertaining to the Kings.

D-Lo & KC give their thoughts on Malik Monk coming to the Kings, what his fit will be and more after breaking the news.

"Willie Got Hit With the Spirit"

James Ham, 1320 Kings Insider & Kings Beat We're about 24 hours away from the start of NBA free agency. It seems like pieces are being put in position throughout the league. A flux of signings are on the way but how much movement will we actually see? The market for Donte DiVincenzo is one of the most important things for the Kings in the upcoming days. It makes sense to let the market dictate the price but what exactly is that? (Turns out they didn't bother extending the Qualifying offer, James Ham joined to discuss) We'll spotlight other potential Kings targets including Kyle Anderson and Caleb Martin. Plus, Draymond Green can't stop talking about 2016, LeBron James appreciation, and are the moves the Knicks making good enough to compete.

ESPN 1320 Kings Insider, James Ham joined the guys for an extended conversation to talk about everything regarding the Kings not extending the qualifying offer to Donte DiVincenzo and what this means for them.

D-Lo & KC spend hour one talking about free agency beginning tomorrow, KC asks if you were the Celtics would you trade Jaylen Brown and three 1sts for KD, they talk Moe Harkless and more.

The guys spend hour two talking about Donte DiVincenzo and the qualifying offer (lol), Warriors fans being mad at Draymond Green, do a breakdown on Kyle Anderson's game and much more.

James Ham breaks the news that the Kings won't be extending the Qualifying offer to Donte DiVincenzo so the guys give their reaction to that and James joins them shortly after to discuss his report.

The guys continue talking with James Ham about the Kings not extending the Qualifying Offer to Donte DiVincenzo and what could be next for them.

Reaction to Kings not extending QO to Donte DiVincenzo

D-Lo & KC give their instant reaction to the Kings not extending the Qualifying Offer to Donte DiVincenzo and what this means for them going forward.

"He's Either Crying Under That Mask Or He's Gonna Die"

Jason Jones, The Athletic Transactional moves are happening across the league ahead of the new league year. Westbrook is staying with the Lakers, John Wall is headed to the Clippers, and teams are submitting tenders to RFA. Theres something pretty glaring about what's happening with RFA and their teams. We have another Positive Kenny take on the Kings. We've also created either/or scenarios that could make the Kings better - you just have to decided which one works the best? Plus, can a team be bad but entertaining, what is Warren Sapp doing, and what is stopping Brooklyn from trading Kyrie Irving after his opt-in.

NBA & Culture writer for The Athletic, Jason Jones joined the guys to talk about whether the Kings are entertaining, his thoughts on the Keegan Murray pick and more.

The guys spend hour one talking about some of the NBA news that broke today, discuss Davion Mitchell and who should start at the 2 guard spot, take calls from listeners on the Kings and more.

D-Lo & KC spend hour two talking about talking about Miles Bridges and others' contract situations, a scenario for the guys to pick that makes the Kings better, and much more on the Kings.

The guys spend this hour talking about the report of Jalen Brunson getting closer to being a Knick, Kyrie Irving's comments yesterday and how the Nets should proceed, discuss scenarios that make the Kings better, and much more.

The guys discuss whether the Kings are entertaining, Jason Jones joins them for a conversation, then after D-Lo & KC talk about Keon Ellis and Justin Holiday.

Are the Kings entertaining?

"This Looks Like the Thing Ghostbusters Put the Ghosts In"

Kyle Draper, Kings play-by-play & pre/post game host The Sacramento Kings introduced the man who will likely be their starting 4 this year, the number 4 pick in the draft, Keegan Murray. What do the Kings need to do know to surround him, Fox, and Sabonis with complimentary talent? What do the Kings have going for them? What things can fans really look forward to with the roster that is currently constructed? Draymond Green was way over the line in his remarks about Kendrick Perkins. Plus, the Giants struggles continue, Yankees win in dramatic fashion, and a real baseball fight.

The guys spend most of the hour talking all about Keegan Murray. They discuss his fit, his comments in his introductory press conference, and so much more.

D-Lo & KC talk about the comment Draymond Green made towards Kendrick Perkins, give some positive notes on the Kings, talk Monte McNair and much more.

The guys spend this hour talking about the impact Terence Davis could have if he's healthy and can shoot the ball, Kyrie Irving looking like he won't be back in Brooklyn then opting in and putting out a quote we don't fully understand, John Wall and much more.

Has Monte McNair been too passive?

KC gives a few reasons why you might be able to make the argument that Monte McNair has been too passive.

"You Look Like You're Drinking What Miles Bridges Drinks"

Deuce & Mo, Deuce & Mo Podcast, NBC Sports CA Bryant West, The Kings Herald Trysta Krick, Bet MGM Tonight Matt George, Locked on Kings Kyle Madson, 95.7 The Game James Ham, 1320 Kings Insider The Kings Beat The Kings selected Keegan Murray at the NBA Draft last night and no one else. The dumped both of there second round picks and what felt like an already underwhelming night got even more so. We'll talk more about Keegan Murray and you'll hear from Kings general manager Monte McNair.

Deuce & Mo joined the guys to give their thoughts on the Kings drafting Keegan Murray, the Kings not making any deals and much more.

Draft Analyst for the Kings Herald, Bryant West joined the guys to talk about what he likes about Keegan Murray's game, the Kings not being aggressive enough and more.

BetMGM Tonight host, Trysta Krick joined the guys to talk about the Kings drafting Keegan Murray, the day Portland had and much more.

Locked on Kings podcast host, Matt George joined the guys to talk about why he thinks Keegan Murray was the right pick, what his impact could be this season and much more.

957 The Game's Kyle Madson joined the guys to talk about why he liked the Keegan Murray pick, the Kings needing to finally build around De'Aaron Fox and more.

The guys talk with Deuce & Mo then Bryant West about the Kings draft.

The guys wrap up their conversation with Bryant West to start the second hour, Trysta Krick joins then Matt George follows near the end.