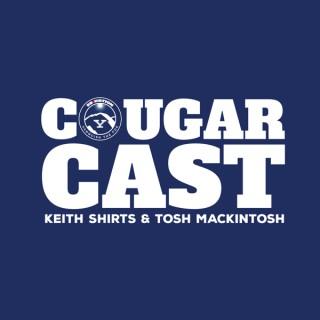 Search for episodes from CougarCast: BYU Sports with a specific topic:

A pair of undefeated teams playing in December? BIG GAME!  Let's take a look at the very good Chanticleers football team and the problems they present.  PLUS, the last couple of weeks have exposed a problem BYU has with their Football program. Time to rant! Thanks to our sponsors -- waveformsleep.com use promo code "COUGARCAST" at checkout to get 20% off an Adjustable Power Base and yourtruevoice.com take a free lesson with Debra Bonner's Superior Vocal Training Program.

In this episode, we remember Kyle Morrell -- the best defensive back in Cougar Football history. We look at BYU Football narratives ahead of the North Alabama game. Lastly, we study over the 2020-21 BYU Basketball roster and non-conference schedule. Check out Debra Bonner's Superior Vocal Training Program, Your True Voice. Upgrade your bedroom with an Adjustable Power Base from Waveform Sleep. Use "COUGARCAST" at checkout for 20% off your order!

Bad things happen in Boise for BYU football -- Will 2020 be different?

The #9 BYU Cougars travel to take on the #21 Boise State Broncos on Friday night. What will it take for BYU to get their first win ever in Boise?

Cougar Football is FUN! More to come for BYU against Texas State?

It has been awhile since BYU Football has been this fun to watch. Zach Wilson's command and trust in Dax Milne is thrilling stuff. Will it continue against Texas State? Hard to think it won't.

The Cougars have opened the season perfectly. Can they keep it going against UTSA? I think they should! Also, Zach Wilson has played the best 3 consecutive games of football by a BYU QB since 2009 -- and the nation is paying attention. What could that mean?

BYU welcomes the LA Tech Bulldogs to LaVell Edwards Stadium. Cougars have looked great. Why? Also, what should we expect on Friday night?

In this episode of CougarCast: A break down of BYU Football's first released depth chart Can BYU's offense get out of the gates quickly? If they can, BYU's chances of winning increase immensely again Navy. Watching out for Navy Linebacker Diego Fagot. He's a beast. Is it terrifying that Ilaisa Tuiaki is freely admitting that he has never had to game plan for and defend a triple-option offense? YES! BYU's depth chart on defense had 14 positions listed, but you can only play 11 guys? What does all that mean for the Cougars D? How to tell if BYU defense is holding their own against the Navy Triple Option (other than just looking at rushing yards). Ken Niumatalolo's success at Navy is astonishing. Outside of FB Jamale Carothers, Navy's offensive personnel is unproven.  Is the game against Navy the challenge of the season for the Y? Keys to victory for the Cougars.

After the chaos of 2020, the BYU Cougars are indeed going to give playing football this season the old college try. After a mass overhaul of their schedule, what are some of the narratives surrounding the BYU Football program? How will those narratives be tested this season? Everything from the coaching staff, offense, defense, and even a little special teams are looked into with analysis about what Cougar fans should look and hope for this season.

Pandemics aren't great. Last week it was announced that the Big Ten and the Pac-12 would only be playing college football within their own conference. That means that BYU lost 5 of their 12 games on the schedule. Goodbye Utah, Michigan State, Arizona State, Minnesota, and Stanford. What does it mean for seeing Cougar football in 2020? Bad news friends. The cancellation of these games brings about an interesting new chapter to COVID-19's impact on the college football season -- the legal battles. Can a team claim the Force Majeure clause if they play 9 conference games?

With the cancellation of the NCAA tournament, the BYU Cougars won't get a chance to ever find out what their March Madness fate would've been. Strangely, that is probably good news for the legacy of this team, Yoeli Childs, and TJ Haws. Despite that, they would have certainly rather had the chance to play it out. Now, as fans and historians, we are left to the theater of the mind -- which is almost exclusively more kind than reality. The "Forever 27" Cougars.

The BYU Basketball team is rollin'! After the huge win over #2 Gonzaga, the Cougars are in a rare spot. They may be able to earn a low seed. Plus, they have a chance to finally have success in a conference championship tournament. Then a discussion about the legacies of Yoeli Childs and TJ Haws.

The last game of the 2019 season will be against the Hawaii Rainbow Warriors played at Aloha Stadium in Hawaii. Can the Cougars slow down the Hawaii offense? Can BYU score enough points to potentially keep up?

Take a look back on the decade of Cougar Football as Keith Shirts tries to make sense of where the program has been and what it all means.

BYU is going to have their hands full with the SDSU offense. And there will nothing on their hands with the Aztec offense. The question is, can BYU do enough offensively to finish the regular season with a road win? It may just come down to how BYU performs in short-yardage scenarios.  Plus, a quick review of the good performance by BYU basketball in Maui.

BYU take on their worst opponent of the season in the UMass Minutemen. Plus, Keith takes a look at Zach Wilson's future and Kalani Sitake's extension. Finally, a quick look at the Maui Invitational and the big question about Mark Pope's coaching style after watching his first four games.

BYU vs. Idaho State should go like you expect

The BYU Cougars are going to play Idaho State. The Bengals are losers of their last 4 games. The Y has won 3 in a row. This game should go as expected. So, what is there to watch for? For one, it is the last time to see Dayan Gwanwoloku play for BYU in person. A brief recap of the bizarre Liberty game. Also, I'm working on an All-Decade Team podcast. Please give any of your feedback at CougarCast@gmail.com

The Cougars crucially brought the Wagon Wheel back home! Now, can they avoid the letdown game against the Liberty Flames. It'll be another question of defensive philosophy -- to Blitz or not to Blitz. Plus, there is a load of talent on the BYU basketball team, can they handle the beginning of their season without Yoeli?

Will the Old Wagon Wheel stay in Logan?

The Cougars head to Logan to take on Utah State for the Old Wagon Wheel. Can BYU avoid losing to the Aggies for a third consecutive game? Absolutely. Will they? Have I introduced you to the Kalani-coaster?  Should be a good game.

Can coming back home make the difference for BYU?

BYU is trending down. Boise State is trending up. To beat Boise State you have to play all 3 phases extremely well and sound for 60 minutes. Can BYU somehow find a way to do something they haven't done this season?

A pair of 2-3 teams will meet on the gridiron in Tampa. Who could have ever predicted that it would be a super important and compelling watch? But it definitely is.  What will Jaren Hall be like? Can Kalani outcoach Charlie Strong to lead the Y to victory?

How does BYU decide to handle Toledo's run attack?

BYU heads to the Glass Bowl to take on Toledo! Sitting at 2-2 after the first 4 weeks is about as good as anyone expected, the next 4 games are the contests that will really tell where BYU is at as a program.  Plus, getting to know the Toledo Rockets and their strengths and weaknesses. Finally, what decision will BYU DC Iliasa Tuiaki make in handling the Rockets Rush Offense?

BONUS POD -- Listener Email -- Would it be better if BYU was playing @ USC instead of LaVell's House on Saturday?

The great CougarCast listeners have brought it this week. So, BONUS POD TIME! Listener email wonders if BYU would be more mentally prepared for USC if they were playing in LA Coliseum instead of LaVell Edwards Stadium. Listener makes the case. Plus, a Twitter interaction caused a deep dive into games decided by the last play of the game, what was Bronco's record in this games and how many of them did he face? Email: CougarCast@gmail.com Twitter: @CougarCast

BYU beats Tennessee! Enjoy it, BYU plays to entertain. Kalani Sitake knows plenty about last play victories. Can they pull out some magic against USC? They need to. Plus, BYU can get further by embracing what they can do and tempering what they can't.

Which team will play smarter football? BYU or Tennessee?

The BYU Cougars and the Tennessee Volunteers are in disarray! So, what can we expect in Knoxville this weekend? Plus, a look into the start of Zach Wilson's career.

How important is beating Utah for BYU? Well, now that it has been 8 losses in a row since 2009, more important than ever. It goes WAY, WAY deeper than bragging rights. Plus, how is the actual game going to play out? What should the game look like if BYU are going to beat the Utes?

On this week's episode: We've seen 34 games at BYU with Kalani Sitake as head coach. He is 17-17. What do we know about having him at the helm? He is a really good guy. And it is going to be extremely up and down. (2:00) Before Michael Shelton ever sounded off on the quality of BYU Football fans, the conversation on Twitter was about the lack of fans checking out the game against Northern Illinois. Why aren't fans going to game? When they do go, why aren't they passionate? Keith does a deep dive into the recent history of BYU Athletics marketing attempts to influence fan behavior and how it is probably a negative factor. (23:20) Oh yeah, BYU plays Boise State this week. Brett Rypien and the Broncos have -- like always -- a very good football team. BYU's ability to pull off their first victory ever in Boise will come down to their ability to defend the pass. Which is no easy task against BSU. (45:50)

This week's task for BYU Football is to figure out a way to put together more than 20 points. Northern Illinois' offense is really poor. Atrocious even. They are 1/2 a team. The issue is that their defense keeps them in games. So, can Zach Wilson lead the Y to enough points against a stout defense to put the Y over the top?

What we learned from the Hawaii game

Here's what we learned for the Hawaii game: Provo, Utah is a house of horrors for the Hawaii football program. The defense had a (small picture) great, but (big picture) frustrating game plan and approach. The offense with Zach Wilson features one distinct advantage over Tanner Mangum and perhaps a psychological benefit. The listeners of CougarCast are smart!