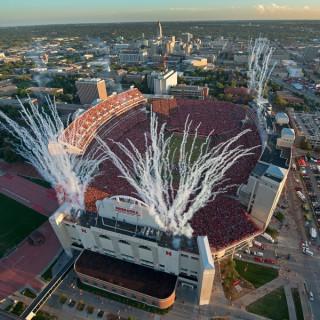 Search for episodes from Nebraska Athletics Podcast with a specific topic:

Three Nebraska track and field athletes qualified for the NCAA Outdoor Championships on day one of the NCAA West Preliminary Round on Wednesday at John McDonnell Field on the University of Arkansas campus.

Nebraska forward Lat Mayen has signed a professional basketball contract in his native Australia and will forego his final season of college eligibility.

The Nebraska track and field team earned a total of 34 bids to the NCAA West Preliminary Round in Fayetteville, Ark., next Wednesday-Saturday, May 25-28.

Addison, Ill. - A trio of Husker bowlers saw their run in the United States Bowling Congress Queens event end on Monday. The Queens, the first major of the 2022 Professional Women's Bowling Association Tour, features 250 of the top female bowlers in the world.

Nebraska fans will soon have an opportunity to purchase a "3-Game Mini-Plan" of 2022 football tickets at Memorial Stadium. The customizable ticket option will go on sale this Wednesday, May 25, at 10 a.m. by visiting Huskers.com/tickets or by calling or visiting the Nebraska Athletic Ticket Office.

Defending champion Julia Bond enters the final day of bracket competition in position to defend her USBC Queens title after a perfect Sunday.

The Nebraska softball team saw its 2022 season come to an end Saturday, as the Huskers fell to North Texas, 3-0 in their third game of the NCAA Stillwater (Okla.) Regional.

Max Anderson hit two of Nebraska's four home runs on Saturday, as the Huskers wrapped up the 2022 season with a 10-9 win vs. Michigan State on Senior Day at Hawks Field.

The Nebraska softball team (41-15) fell to No. 7 Oklahoma State (43-12) Saturday afternoon. The Cowgirls claimed a 7-4 victory over the Huskers.

Addison, Ill. - A number of former Husker bowlers are in action this weekend competing at the 2022 United States Bowling Congress Queens.

Brice Matthews delivered a three-run blast in the bottom of the eighth, as the Huskers kept their postseason hopes alive with a 6-3 win vs. Michigan State at Hawks Field on Friday night.

Huskers Shut Out Mean Green in Game One of NCAA Regionals

Behind senior pitchers Olivia Ferrell and Courtney Wallace, the Nebraska softball team (41-14) picked up the win in game one of the NCAA Stillwater Regional over North Texas.

Nebraska threatened in the bottom of the ninth but couldn't rally to plate the tying run, as the Huskers suffered a 4-1 loss vs. Michigan State at Hawks Field on Thursday night.

The Nebraska track and field team earned a total of 34 bids to the NCAA West Preliminary Round in Fayetteville, Ark., next Wednesday-Saturday, May 25-28.

DALLAS (FWAA) – Nebraska's Athletic Communications staff was honored for its work during the season, as the Huskers were honored as the Football Writers Association of America announced its Super 11 for the 2021 football season on Thursday.

Nebraska track and field's Maxwell Otterdahl was named the Big Ten Men's Field Athlete of the Championships on Wednesday after a vote by the league's head coaches.

The Nebraska softball team is set to make its 25th appearance in the NCAA Tournament at the NCAA Stillwater Regional. The Huskers will face North Texas in game one on Friday, May 20, at 5 p.m. (CT) at Cowgirl Stadium.

The Husker offense produce two three-run innings in the first three innings on Tuesday night, as the Huskers posted a 9-5 win over Oral Roberts at Hawks Field.

Registration is now open for the 10th-annual Nebraska Football Road Race and will be held Sunday, July 17 in Lincoln. The one-mile Fun Run begins at 8 a.m. and the 5K run will follow with an estimated start time of 8:30 a.m. Both races will start and finish on Stadium Drive on the west side of Memorial Stadium.

Nebraska suffered a 5-4 loss in the bottom of the ninth at Illinois in the series finale on Sunday, which featured two weather delays that combined for four hours and 53 minutes.

The Nebraska track and field team collected three more Big Ten titles on the final day of the Big Ten Outdoor Championships to give them a total of six for the weekend.

Maxwell Otterdahl was crowned the Big Ten shot put champion, and Jenna Rogers made it a sweep of the Big Ten indoor and outdoor high jump titles as the Huskers competed on day two of the Big Ten Outdoor Championships on Saturday at Minnesota.

Huskers Cruise Past Illinois in 11-2 Win on Saturday

Nebraska scored in six consecutive innings at Illinois on Saturday, as the Huskers cruised to an 11-2 win over the Illini at Illinois Field in Champaign, Ill.

Nebraska sophomore Maddie Harris won the Big Ten javelin title for the second straight year to lead the Nebraska track and field team on Friday at the Big Ten Outdoor Championships at the University of Minnesota Track & Field Stadium.

Nebraska fell 8-3 in the series opener on the road at Illinois on Friday night at Illinois Field in Champaign, Ill.

Olivia Ferrell hit a RBI double in the bottom of the seventh to advance the Huskers to the Big Ten Tournament. Nebraska recorded a 2-1 walk-off victory over Ohio State in the semifinals on Friday afternoon.

A total of 76 Husker student-athletes will earn degrees this weekend during the University of Nebraska-Lincoln's commencement ceremonies, with graduate commencement occurring on Friday at 3 p.m. at Pinnacle Bank Arena, before undergraduate commencement is scheduled to be held at Memorial Stadium on Saturday at 10 a.m. If inclement weather becomes a factor for the May 14 ceremony, it could be pushed back to Saturday or Sunday afternoons.

The Nebraska softball team (38-14) advanced to the semifinals in the Big Ten Tournament after claiming a 3-1 victory over Penn State (32-22).

The Nebraska track and field team will compete at the Big Ten Outdoor Championships in Minneapolis, Minn., this weekend.

Baete Fires 69 in Final Round

Nebraska women's golfer Kirsten Baete fired a final-round 69 to vault up the leader board and tie for 30th individually at the NCAA Stanford Regional in California on Wednesday.

Former Husker volleyball standouts Kelsey Robinson and Justine Wong-Orantes are two of the 25 players on the roster.

Freshman catcher Ava Bredwell was named the 2022 Big Ten Freshman of the Year on Wednesday, when the conference announced its postseason awards. Bredwell was also one of seven Huskers to earn All-Big Ten accolades, tying Northwestern for the most selections in the league.

The Nebraska softball team is set to travel to East Lansing, Mich., for the Big Ten Tournament this week, May 11-14. The Huskers go in as a No. 2 seed, receiving a bye for the first round of the tournament. NU will take on the winner of Penn State and Indiana on Thursday, May 12 at 10 a.m. (CT). All tournament games will be broadcasted live on the Big Ten Network. Fans can listen to the action live on the Huskers Radio Network, Huskers.com and select Huskers Radio Network affiliates with the call from Nate Rohr.

Nebraska All-Big Ten women's golfer Kirsten Baete opened play at the NCAA Stanford Regional with a 75 on Monday in California.

Nebraska has earned the No. 2 seed for this week's Big Ten Softball Tournament and will face the winner of No. 7 Penn State and No. 10 Indiana on Thursday at 10 a.m. (Central) on the Big Ten Network. The 2022 Big Ten Softball Tournament is being hosted by Michigan State University in East Lansing, Mich., and the single-elimination event runs from Wednesday to Saturday.