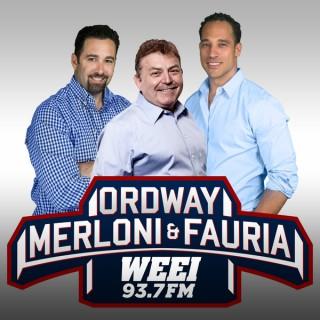 Search for episodes from Ordway, Merloni & Fauria with a specific topic:

HOUR 4: The Celtics will be without Derrick White in Game 2 against the Heat. Derrick is back in Boston for the birth of his first child. To our surprise, many women who listen to the show called in to say Derrick should be playing tonight! Will the Celtics return home with a 1-1 split?

Belichick to take more control of the offense than ever before?

HOUR 3: Merloni, Fauria, & Mego talk with Jack Edwards who joins to wrap up the Bruins season. Nick Saban vs Jimbo Fisher is the rare college football topic to reach Boston sports radio. Is Bill Belichick planning to take more control of the offense (21:30) than ever before? Plus, did the Patriots draft a player with potential to be a Slot WR?

Jack Edwards joins to wrap up the Bruins 2021-22 season

Jack Edwards joins to wrap up the Bruins 2021-22 season

Is Jimmy Butler getting too much love after Game 1 vs Celtics?

HOUR 2: Gary Washburn of the Boston Globe joins us to preview Game 2 between the Celtics-Heat. Is Jimmy Butler getting too much love after a stellar Game 1 performance? Will Marcus Smart be able to shut Jimmy down? Cam Neely spoke today on the future of Don Sweeney and Bruce Cassidy

Will Celtics take Game 2 after getting good news on Horford, Smart?

HOUR 1: Merloni, Fauria, & Mego discuss tonight's huge Game 2 between the Celtics and Heat. Boston gets great news regarding the status of Al Horford and Marcus Smart. The Red Sox get a performance unlike they've had in nearly 3 years. Plus, Rafael Devers joined the Sox postgame show and spoke in English for what we believe is the first time in public.

Our opening thoughts and storylines on Celtics-Heat Game 2

Merloni, Fauria, & Mego discuss the storylines heading into Celtics-Heat. Will Marcus Smart be effective in his return? How does Al Horford get back on the court? Plus, a caller is PISSED at Derrick White for missing Game 2 due to the birth of his first child

Grant Williams may need to tone it down just a notch

After seeing his performance in Game 1 where he was mic'd up once again, Grant Williams may need to tone it down just a notch. The flopping, the talking to the refs, battling Ime Udoka...

What does the Game 1 loss mean for rest of Celtics-Heat series?

HOUR 3: Merloni, Fauria, & Mego discuss the Patriots facing the heat in the 2022 season. What does the Game 1 loss mean for rest of Celtics-Heat series?

HOUR 2: Merloni, Fauria, & Mego discuss the Celtics not having Al Horford and Marcus Smart in Game 1 against the Heat. Which player does the team need to return more?  Brian Scalabrine joins us to discuss Celtics-Heat Game 1.

HOUR 1: Merloni, Fauria, & Mego discuss the disappoint Game 1 loss by the Celtics in Miami. What the heck happened in the 3rd quarter to get outscored on 39-14? Alex Cora (22:52) joins for his weekly call in. Al Horford was ruled out last second and placed into health and safety protocols

Is the Celtics season already a success ahead of Eastern Conference Finals?

Sox won't repeat the Betts failed negotiations with Bogaerts will they?

HOUR 3: Merloni, Fauria, & Mego discuss the Red Sox and lack of negotiations with Xander Bogaerts. X now says he is willing to listen to offers in season. Does this now give the Sox a chance to get a deal done? Meghan Ottolini experiences her first ever "Big Deal or No Big Deal?". Plus, Joe Judge might be the biggest hardo to ever be on the Patriots coaching staff

What does Tatum need to do to become a Top 5 player?

What does Tatum need to do to become a Top 5 player?

Gary Washburn of the Globe joins to preview Celtics-Heat series

HOUR 2: Merloni, Fauria, & Mego catch up with Gary Washburn of the Boston Globe who joins to preview the Celtics-Heat series in the Eastern Conference Finals. How have these teams changed since the 2020 ECF meeting? Plus, what does Jayson Tatum need to do to be considered a Top 5 player? Or is he already there?

HOUR 1: Merloni, Fauria, & Mego discuss the Sox fans chanting "RE-SIGN XANDER" while Bogaerts was at the plate last night. Lou Merloni wonders if the Sox had planned to use Garrett Whitlock as a starter all along, even at the point of signing an extension when he was in the bullpen. More Patriots coaches talked this afternoon and the crew reacted to some of the highlights.

Merloni, Fauria, & Mego discuss the Sox weekend where the bats are finally showing signs of life

What advantage do Pats get by not discussing coaching roles?

What advantage do Pats think they get by not discussing coaching roles?

HOUR 4: We start the hour hearing from the Patriots coaching staff who does not want the public to know the roles of each coach. The Celtics have no time to celebrate their series win over the Bucks with the Miami Heat awaiting them in the Eastern Conference Finals. Worried about the C's being worn down after a grueling series? Jayson Tatum says he knows how to take care of his body now compared to their last ECF appearance

HOUR 3: Chris Mannix of SI joins at the start of this hour to react to the Celtics Game 7 win over the Bucks in what will forever be known as "The Grant Williams Game". Plus, Patrice Bergeron says he can't envision himself playing for any other team. Is retirement in store for the B's legend?

HOUR 2: The Bruins season is over and the rumors of Patrice Bergeron headed towards retirement won't go away. Patrice addressed the rumor of him going to the Montreal Canadiens. The Patriots coaches talked for the first time this offseason and there was one noticeable theme: don't give the media anything when asked about coaching roles. Plus, the Red Sox bats are showing signs of life after winning the series in Texas

HOUR 1: Merloni, Fauria, & Mego discuss the Celtics Game 7 win at home over Giannis Antetokounmpo and the Bucks. Milwaukee dared Grant Williams to beat them and he did just that. Worried about the Celtics being worn down headed into the Eastern Conference Finals?

Our way too early predictions after Patriots schedule released

Our way too early predictions after the Patriots schedule was released

Patrice Bergeron to the Montreal Canadiens?

Patrice Bergeron, a future Montreal Canadien? Merloni Fauria and MegO do not like the thought of that...

HOUR 4: Merloni, Fauria and MegO give their predictions for the Patriots season after the schedule release, Celtics-Bucks Game 6 and Bruins-Canes Game 7

Is Game 6 the biggest moment of Tatum's career?

HOUR 3: Merloni, Fauria and MegO discuss Jayson Tatum in Celtics-Bucks Game 6 tonight. The B's saved its season with a win Game 6. Will they win on Saturday to take the series? Plus, the Patriots revealed its 2022 schedule with absolutely zero fireworks

Will the Celtics extend season by winning Game 6 tonight?

HOUR 2: Merloni, Fauria and MegO discuss some surprising audio from Tony Almonte on NBC Sports Boston. Tony says there are rumors that Patrice Bergeron may be looking to join the Montreal Canadiens. Meghan Ottolini wrote her first column for the website. The subject is Marcus Smart and his role in Friday night's Game 6. Scott Foster is one of three officials on Celtics-Bucks Game 6. Why is Foster allowed to officiate NBA games after strong connections to the NBA betting scandal with his best friend Tim Donaghy?

Our analysis, observations of the Patriots 2022 schedule

HOUR 1: Merloni, Fauria and MegO discuss the Patriots 2022 schedule. What is your way too early prediction? Plus, the Bruins saved their season last night with a win in Game 6. Anson Carter on TNT questioned if Patrice Bergeron still "has it" anymore

Our analysis of Patriots schedule with reported leaks so far

Our analysis of Patriots schedule with reported leaks so far

Who gets the blame for the Celtics late game collapse in Game 5?

HOUR 4: Merloni, Fauria and MegO discuss the Celtics collapse late in Game 5 at home against the Bucks. How did it happen? Who is at fault? Is this series now over? Plus, the show gets into to the Patriots schedule leaks for the upcoming season

More likely to save its season: Bruins or Celtics?

HOUR 3: Jack Edwards joins us ahead of the Bruins-Canes Game 6 with the B's season on the line. Which team is more likely to save its season: Bruins or Celtics? What happened with the Celtics broken play where Jrue Holiday blocked Marcus Smart? How did Smart miss a wide open Jayson Tatum?

Is it time to expect an NBA Finals appearance from Tatum and Brown?

HOUR 2: Merloni, Fauria and MegO discuss the Celtics heartbreaking loss in Game 5. MegO is bothered by the loss and says it's time for the Celtics two stars to get to the NBA Finals. Is Marcus Smart getting too much blame for the loss? Plus, Jarrett Stidham was traded today to the Raiders. And Bill Belichick may actually let Matt Patricia call plays. WHY?!

How did the Celtics blow it in Game 5 at home vs Bucks?

HOUR 1: Merloni, Fauria and MegO discuss what went wrong for the Celtics and how they collapsed in the 4th quarter against the Bucks in Game 5. Jeff Goodman of Stadium joins us to talk abou the game and the series going forward

Sox trading Bogaerts is a depressing thought but real possibility

The uncertain future of Al Horford with the Celtics

The uncertain future of Al Horford with the Celtics

Robert Williams is OUT for Celtics-Bucks Game 5

HOUR 4: The Celtics-Bucks head into a pivotal Game 5 tonight at TD Garden. Merloni, Fauria and MegO get breaking news during this hour that Robert Williams III will miss Game 5. Are you concerned about the Timelord missing a second straight game?