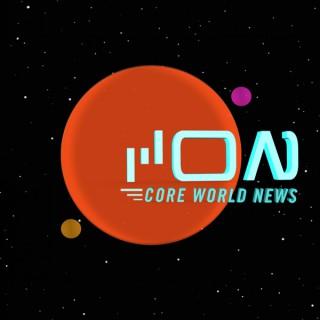 We tackle the real news, issues, and theories facing the Star Wars community on a weekly basis. We are a positive Star Wars forum that focuses on everything we love about the the Galaxy Far, Far, Away, but near to our hearts.

Search for episodes from Star Wars: Core World News with a specific topic:

This week join our Core World News Team on a journey through Star Wars lore like never before! Andor Episode 4 calls back to Early Kurisowa films, direct correlations to Jyn Erso's beginnings, parallels between Luthen Rael and Sheev Palpatine. PLUS the most exciting seating plan ever created!! Suspense and political intrigue are on the menu!

Join Grandt, Atum and, back from field deployment to the ring of Kefrene, Benn for a fully armed and operational podcast doing an EVEN DEEPER DIVE into the commencement of Tony Gilroy's "Andor" Series. We cover the potential future tutelage of Luthien Rael, what will bring the empire to Ferrix, and some speculation as to the contents of the mine on Kenari. AND So Much More!

Join our News team for their introductory review of the new live action series ANDOR!!!

Episode 256 - BOOK REVIEW!! The Princess and the Scoundrel by Beth Revis!!! PLUS News about Rogue Squadron and Jedi Reborn!

Join  the Core World News Team this week for an in depth review of Beth Revis' Book: The Princess and the Scoundrel!! Delight in their Ewok nuptials!!! Revel in the majesty of the Halcyon Legacy!! Explore the new world of Madurs!! PLUS we talk about the ever postponed Rogue Squadron feature film which is now off the production slate. Play a game with us involving said princess and scoundrel, and dive into the possibilities unknown for future films, tv and books!!!

This week the Core World News Team discusses all of the Star WARS reveals from the D23 conference. We learn more about the upcoming Jon Watts series SKELETON CREW. We also discuss the new animated series Tales of the Jedi and the extension of stories for Jedi Dooku and Ahsoka Tano. PLUS we discuss the new Andor trailer and play a game called "SIDEKICKS"!! Join us for an exciting new episode of Core World News!

This Week! We talk about the news that Rian Johnson still plans on making his Star Wars Trilogy, AND Hints at what Star Wars News may come out of Disney's D23 Conference next week! PLUS we power up the hyperdrive and PUNCH IT into the new Han Solo and Chewbacca comic run! We talk about what we learn from these stories and what a Solo Feature film sequel may explore!

THIS WEEK! A Reading Rathtar Special covering Kiersten White's PADAWAN!!! "One of the most fun Star Wars reads you'll ever have" "5 Sabers" "A book that is fun to reread over and over". PLUS  Adam brings out an old favorite from his years in the Video Rental Store for our game of the week!

Episode 252 - Book Review: Stories of Jedi and Sith!!! PLUS New companion books announced for the new video game Jedi:Survivor!! AND our GAME OF THE WEEK

This week we do a deep dive into the compendium of short stories known as Star Wars: Storie of Jedi and Sith!!! We talk about what it would really like to face off against B-1 battledroids, some possible futures for Rey Finn, Poe and the sequel gang, and how amazing Sam Witwer is at voice acting! Plus we discuss the upcoming novel "Battle Scars" which takes place between the Video Games Jedi: Fallen Order and Jedi: Survivor! AND at the end of the episode we play our game of the week where Grant challenges Adam and Ben to "Name that Home World"!!!

Episode 251 - 5 Issue stand alone comic HALCYON LEGACY reviewed!!! PLUS New and notes from around the galaxy and the GAME OF THE WEEK!

This week The Core World News Team takes a trip on the luxury cruisliner, Halcyon Legacy, and reviews a great 5 issue comic arc based on the luxury "cruise" offered at Disney World. We also talk about Rogue one in the theaters to welcome in the Andro series! AND... Will Plagieus be in the new Acolyte TV series?

On this episode we discuss what made Light and Magic such a unique and special team!!! We also discuss Andor and all the ways that is different from its fellow Live action Star Wars Programs! PLUS we've added a new game segment. THIS WEEK We play JEDI? SITH? or George Lucas? Who said what!

Episode 249 - SPECIAL GUEST Meg Dowell Mondom from Star Wars Book Reviews, Dork side of the Force, and Now This Is Lit podcast joins us to Review Adam Christopher's SHADOW of the SITH!!!

On this very special podcast the Core World News Team is joined by Meg Dowell Mondom, Editor of Dork Side of the Force, owner of the Star Wars Book Reviews IG Account and Host of NOW THIS IS LIT Star Wars Podcast. Join us as we interview Meg about her unique relationship with the Galaxy Far, Far Away. Hear about the insight she has received from Star Wars authors, and she loves Star Wars books so much. Hear her amazing insight onto Adam Christopher's SHADOW of the SITH novel and also her courageous effort to defend women's rights through WHAT CHOICE?! Click on the link below to help join the fight and get this great cause to its goal!! They are SO CLOSE!! https://www.gofundme.com/f/what-choice Also we play a fun game with Meg where we NAME THAT JOHN WILLIAMS SCORE!!! (Meg does surprisingly well... all things considered) https://www.instagram.com/starwarsbookreviews/

This week we catch up on the news from a galaxy far, far away!!! Andor to release a double episode for premier and will have directors working in trilogies on the series!! Simon Pegg is right? Skeleton Crew new production notes!!! Plus a favorite lightsaber quiz and a couple show pitches for good measure.

In this Episode we revisit our favorite archeologist in the Galaxy!!! This comic arc is another crazy Aphra adventure uncovering a new Sith cult called The Ascendent!!

What was Palpatine's Plan? What new things did we learn about our two heroes? If Obi Wan and Anakin are brothers, who is the father? Can we pull off a Mace Windu live action series?? Get your answers here!

THIS WEEK!!! we give some more thoughts on a fantastic Obi Wan Kenobi series and where they could go with a second season. ALSO we cover the full 5 issues arc of CRIMSON REIGN and review the exploits of Qi'ra and her killer cadre featuring the Orphans, The Knights of Ren, Deathstick, Ochi of Bestoon, and introducing...The Archivist...

Episode 244 - The Obi Wan Kenobi Finale is HERE!!! We cover the whole episode and bask in the glow of it's red and blue lightsabers!!!!

This week! We cover the Obi Wan Kenobi Episode 6 Finale and give props to Natalie Holt for her masterful score, Break down the rematch of the millennia, and contemplate the future for all of the heroes and villains from this masterpiece of a mini-series.

This week! We talk about Episode 5 of Obi Wan Kenobi and cover where Leia got the idea for naming her son, the evolution of Obi Wan's mentorship skills, lore bombs from the wall, lessons from Tala, the future of The Path, new possible stories from The Dark Times and Much, Much MORE!!!

This week the Core World News Team discusses the growth of Obi Wan's powers, The deep connection to Fallen Order and A New Hope and Reva's lurking light side!!!

Episode 241 - Obi Wan Kenobi Episode 3 Review!!!! What a bonkers good series this is!!! What happened and all the fun directions this story can go!!!

What a Weekend it was at Star Wars Celebration 2022. We wrap up the weekend with a healthy dose of chat about Obi Wan Kenobi! We also cover Tales of the Jedi, Visions, Mandalorian seasons 3 and 4, Ahsoka, and Bad Batch season 2!!!

Episode 239 - OBI WAN KENOBI ARRIVES!!!! A break down of the first two episodes of the NEW Obi Wan Kenobi Series!!!

JOIN US to discuss the explosive new series featuring Obi Wan Kenobi, Darth Vader, The Inquisitorious, The WHOLE ORGANA FAMILY, The Lars Homestead and so many new fantastic Characters!!!

Episode 238 - HOLY BANTHA What an eventful Day 1 of Star Wars Celebration!!! We discuss the NEW Andor Trailer, the NEW Mandolorian Season 3 Trailer, The NEW show "Skeleton Crew" with JUDE LAW Announcement, and a Rancor sized haul of news about High Republic Phase Two (IT's A PREQUEL!!!)

This week we discuss the full runway of STAR WARS media coming to VOD and film as revealed in the new Vanity Fair article!!! PLUS All the stuff you wanted to know about Obi Wan Kenobi from Stewjon to Mortis!!!

Juicy new info about Luke Skywalker's search for knowledge pre- Return of the Jedi in this fabulous Star Wars Main run Comic Arc!!! Plus !!! New info about the follow up to Jedi:Fallen Order.. SURVIVOR

This Week on Core World News!!! We take a look at the new Book of Boba Fett Gallery Episode going behind the scenes with Robert Rodriguez, Dave Filoni, and Jon Favreau. We talk about what happened and what may yet come to pass! PLUS We go in depth on the NEW Obi-Wan Kenobi trailer, and ponder the mysteries of the up coming disney + Series!!!

Reviewing E.K. Johnston's short, but STACKED final installment of her Queen's trilogy. The new novel reads like the missing movie between Attack of the Clones and Revenge of the Sith. We talk all about the fascinating new POVs from Chancellor Palpatine, Aniken Skywalker, Plo Koon, Barriss Offee, Beru Whitesun, Breha Organa and of course Senator Amidala and her Sisters in arms. PLUS Rumors of a Tales of the Jedi animated series!!!

This Week!! We talk about two new Characters casted for the acolyte series, two original trilogy characters coming to Andor, Natalie Holt scoring the Kenobi Series and Amy Hennig's new Star Wars Game, plus a rumor of a High Republic TV series. Also! A Kyber Crystal Comics Corner covering the most recent Vader run issues 18 to 22. Tune IN and Turn ON.

Episode 232 - PILLARS of STAR WARS!!! This week we cover WARS in the STARS!!! An obvious pillar filled with Battle Tactics, Objectives, and Theaters or War

In this episode we each draft 3 potential new directors that would bring an exciting new flavor to the galaxy far, far away! Plus we talk about pretty much every current director making movies at this time and what their movie might look like. Lots of great options out there!

Episode 228 - We finish off our coverage of The High Republic PHASE 1 of story telling with Marvel's High Republic Comic Issues 11 through 15 and the two part special EYE OF THE STORM Comics!!!

Episode 227 - Kenobi Trailer!!! Plus a Double Reading Rathtar!!!! Reviews of the High Republic Books: Mission to Disaster and Midnight

Episode 216 - BOOK of BOBA FETT IS HERE!!! Stranger in a strange land review!!! PLUS Adam spent 3 days in Batuu and has reported back on the Black Spire!!

Episode 212 - CRIME SYNDICATE Special Report!!!! Who might we see in Book of Boba??

Episode 209 - A DISNEY PLUS DAY Special Report!!! New looks at OBI WAN and news about Acolyte, Rogue Squadron and MORE!