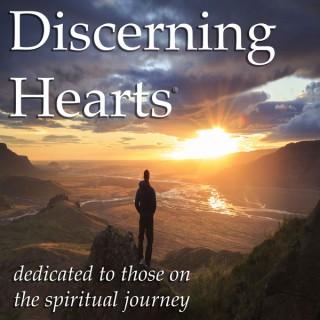 Fr. Timothy Gallagher, Dr. Anthony Lilles, Deacon James Keating, Archbishop George Lucas, Msgr. John Esseeff and so many other Catholic Spiritual leaders and teachers/catechists offer the best teachings in the rich Catholic Spiritual/Discernment tradition. From lives of the saints to the basics o…

Search for episodes from Discerning Hearts - Catholic Podcasts with a specific topic:

The Gift of Counsel – Building a Kingdom of Love with Msgr. John Esseff Podcast

Msgr. Esseff reflects on the gift of counsel and its role in relation to prudence and discernment. According to St. Thomas Aquinas: Counsel allows a man to be directed by God in matters necessary for his salvation (II/II.52.1). Msgr. John A. Esseff is a Roman Catholic priest in the Diocese of Scranton.   Msgr. Esseff served ... Read more The post The Gift of Counsel – Building a Kingdom of Love with Msgr. John Esseff Podcast appeared first on Discerning Hearts Catholic Podcasts.

Materialism vs Gratitude is the subject addressed in our first episode.  How to deal with things. "Do you really need it?" This is the question we are called to ask ourselves. The post In Place of Materialism, Gratitude – The Holy Rule of St. Benedict with Fr. Mauritius Wilde O.S.B – Discerning Hearts Podcast appeared first on Discerning Hearts Catholic Podcasts.

"The Abolition of Woman:  How Radical Feminism is Betraying Women" is a powerful book and so needed today.  Author and international pro-life advocate Fiorella Nash is an incredible advocate for authentic feminism.  With this work, she shines a bright penetrating light on the destructive twistings and distortions projected onto women throughout the world by extraordinarily dark forces that many cannot or do not want to see. The post Fiorella Nash – The Abolition of Woman on Inside the Pages with Kris McGregor Podcast appeared first on Discerning Hearts Catholic Podcasts.

SP 38 – Episode 38 – From Caterpillar to Butterfly – In Search of the Still Point with Dr. Regis Martin – Discerning Hearts Podcast

St. Ephrem of Syria – The Doctors of the Church: The Charism of Wisdom with Dr. Matthew Bunson

Born: 306 AD, Nisibis, Turkey Died: June 9, 373 AD, Edessa, Turkey Full name: Ephrem of Nisibis From Vatican.va, an excerpt from the teachings of Pope Benedict XVI General Audience 2007: The figure of Ephrem is still absolutely timely for the life of the various Christian Churches. We discover him in the first place as a theologian who reflects poetically, on the basis of Holy Scripture, on the mystery of man's redemption brought about by Christ, the Word of God incarnate. His is a theological reflection expressed in images and symbols taken from nature, daily life and the Bible. Ephrem gives his poetry and liturgical hymns a didactic and catechetical character: they are theological hymns yet at the same time suitable for recitation or liturgical song. On the occasion of liturgical feasts, Ephrem made use of these hymns to spread Church doctrine. Time has proven them to be an extremely effective catechetical instrument for the Christian community. Ephrem's reflection on the theme of God the Creator is important: nothing in creation is isolated and the world, next to Sacred Scripture, is a Bible of God. By using his freedom wrongly, man upsets the cosmic order. The role of women was important to Ephrem. The way he spoke of them was always inspired with sensitivity and respect: the dwelling place of Jesus in Mary's womb greatly increased women's dignity. Ephrem held that just as there is no Redemption without Jesus, there is no Incarnation without Mary. The divine and human dimensions of the mystery of our redemption can already be found in Ephrem's texts; poetically and with fundamentally scriptural images, he anticipated the theological background and in some way the very language of the great Christological definitions of the fifth-century Councils. Ephrem, honoured by Christian tradition with the title "Harp of the Holy Spirit", remained a deacon of the Church throughout his life. It was a crucial and emblematic decision: he was a deacon, a servant, in his liturgical ministry, and more radically, in his love for Christ, whose praises he sang in an unparalleled way, and also in his love for his brethren, whom he introduced with rare skill to the knowledge of divine Revelation. For more visit Vatican.va The post St. Ephrem of Syria – The Doctors of the Church: The Charism of Wisdom with Dr. Matthew Bunson appeared first on Discerning Hearts Catholic Podcasts.

SP 37 – Episode 37 – The Story of the Hazelnut – In Search of the Still Point with Dr. Regis Martin – Discerning Hearts Podcast

St. Athanasius of Alexandria – The Doctors of the Church: The Charism of Wisdom w/ Dr. Matthew Bunson Podcast

Dr. Matthew Bunson discusses the life, times and work of St. Athansius of Alexandria From Vatican.va, an excerpt from the teachings of Pope Benedict XVI General Audience 2007: Athanasius was undoubtedly one of the most important and revered early Church Fathers. But this great Saint was above all the impassioned theologian of the Incarnation of the Logos, the Word of God who - as the Prologue of the fourth Gospel says - "became flesh and dwelt among us" (Jn 1: 14). For this very reason Athanasius was also the most important and tenacious adversary of the Arian heresy, which at that time threatened faith in Christ, reduced to a creature "halfway" between God and man, according to a recurring tendency in history which we also see manifested today in various forms. The post St. Athanasius of Alexandria – The Doctors of the Church: The Charism of Wisdom w/ Dr. Matthew Bunson Podcast appeared first on Discerning Hearts Catholic Podcasts.

An Excerpt from today's posting and podcast: Catherine of Siena - passion for truth She is an important figure for those who see a rediscovery of prayer as the force of renewal in the Church. Because she put her devotion to Christ first, she found herself with a spiritual mission to help restore the life and unity of Christ's body. Some of her efforts met with a little success. But as she approached her death at the age of 33, her lifetime of effort in building up the Church seemed to be in vain. Corruption, scandal, cowardice - and most of all indifference - seemed to infect the Church even more. (For more on her life, go tohttp://www.newadvent.org/cathen/03447a.htm.) Yet she never lost hope and she persevered in prayer. This is because she understood the love and mercy of God. She was uneducated, but in 1377, by a miracle, she learned to write. Even so she retained secretaries to whom she dictated most of her thoughts. Her master work on the spiritual life is known as the Dialogues. These are conversations between her soul and God the Father. God the Father reveals his deep love for his Son and his plan to build up the Church. One of the beautiful aspects of this conversation is the Father's explanation for how each soul can come to know Jesus. Christ is the bridge to the Father and we cross this bridge by allowing our hearts to be pierced by what the Lord has done for us. The passion of Christ reveals at once the truth about who God is and who we are in his sight. For her, among the greatest blocks to the spiritual life is ignorance. Knowledge of God and knowledge of self go hand in hand in progressing toward spiritual maturity. But the knowing is not simply an intellectual trip. It as the kind of knowing informed by the loving affection of a real friendship. The friendship she describes in tender terms evokes the deepest joys and sorrows all at once..... The post St. Catherine of Siena – Passion for Truth: Beginning to Pray w/ Dr. Anthony Lilles appeared first on Discerning Hearts Catholic Podcasts.

SP 36 – Episode 36 – God Will Wipe Away Every Tear – In Search of the Still Point with Dr. Regis Martin – Discerning Hearts Podcast

Who are you? Your Catholic Identity on Divine Mercy Sunday w/ Msgr. John Esseff

Msgr. Esseff reflects on the readings for the 2nd Sunday of Easter and it's meanings for our lives. He discusses the identity of the Christian, and in particular, what it means to be a "Catholic". The post Who are you? Your Catholic Identity on Divine Mercy Sunday w/ Msgr. John Esseff appeared first on Discerning Hearts Catholic Podcasts.

IP#487 Fr. Eamonn Bourke – Make Your Home In Me on Inside the Pages with Kris McGregor podcast

Make Your Home In Me: Reflections on Prayer is a gem of a book and so is the opportunity to talk with its author Fr. Eamonn Bourke.  Fr. Timothy Gallagher said it best when asked to review this book – “Do you want to pray? Really to pray? To pray daily? To pray from your heart? Then ... Read more The post IP#487 Fr. Eamonn Bourke – Make Your Home In Me on Inside the Pages with Kris McGregor podcast appeared first on Discerning Hearts Catholic Podcasts.

TEACHING DISCERNMENT A Seminar to Prepare Teachers of Ignatian Discernment with Fr. Timothy Gallagher What to expect: Father Gallagher will share the teaching pedagogy he has developed for instructing others in the Fourteen Rules for the Discernment of Spirits and will assist participants to find their way as competent teachers of these invaluable tools for the daily spiritual life. The post Teaching Discernment DH Seminar – A conversation with Fr. Timothy Gallagher appeared first on Discerning Hearts Catholic Podcasts.