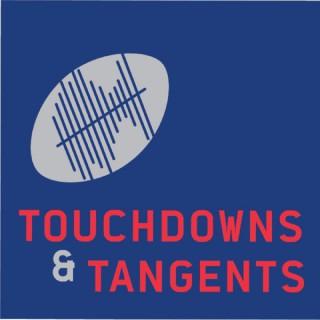 Search for episodes from Touchdowns and Tangents with a specific topic:

Latest episodes from Touchdowns and Tangents

TDT 291: It's not a good Jamaican Spot if the Customer Service ain't bad

Love is a Pineapple-filled Gulag

Kenny and Pete break down the week's latest news. Check it out here on touchdownsandtangents.com. #LetsTalkAboutItRIP former first round pick and Panthers cornerback Rasard Anderson Demaryius Thomas had Stage 2 CTEMarion Barber died of a heat strokeMitchell Schwartz retires after 9 yearsRIP former Oregon tight end Spencer Webb#CollegeFootballNewsMike Gundy calls out TexasVince Young says playing at Texas is like being an NFL QBBaylor picked to finish 1st in the Big 12#TakeOrTangentJalen Ramsey said his first 6 years are better than any DB everZach Wilson Milfgate #TouchdownOrTurnoverJustin Jefferson said the

Kenny and Pete talk the breakdwon from the Pac-12 as well as other trade rumors.

It's a Fantasy to Draft a Rundown from the Couch

Kenny and Pete breadown the latest offseason news and rumors. Check it out here and on Touchdowns and Tangents.

Does Eating Chicken & Chicken-Adjacent Products Together Cause Writer's Block? PT. 3

Does Eating Chicken & Chicken-Adjacent Products Together Cause Writer's Block? PT. 2

Does Eating Chicken & Chicken-Adjacent Products Together Cause Writer's Block? PT. 1

We'll stitch this together later

Kenny and Pete break down the NFL D. raft with experts from the Rams and Chargers

Kenny and Pete bring on guests to give you what you need for the 2022 NFL Draft.

Kenny and Pete preview the draft and free agency.

Kenny and Pete break down the latest free agency rumors and stop prepare for the Free Agents.

Free Agency Has Better Customer Service than the DMV

The Good News is I'm Not Crying On Air, You're Crying on Air

Slow sports week but we talked about the NFL Combine boycott that almost happened by the NFL agents, potential free agents, resign Derek Carr or trade him, Take or Tangent, Touchdown or Turnover and some tangents to end the show.

We Want More Bandwidth for Our Birthdays

In Case You Didn't Know, It's Black History Month

Is Radio a Three-Syllable Word?

How You Gonna Hate Outside the Playoffs When Your Fan Base Can't Even Get In?

Kenny and Pete talk the latest NFL, College football and pop culture news through a journalistic lens with comedic execution live at 8:30 p.m.Main topics of the night1. NFL Divisional round playoffs2. NFL draft news3. Postseason predictionsCollege Football News1. Transfer portal2. Todd Graham resigns as Hawaii football coach#TouchdownOrTurnover and #TakeOrTangent1. Transgender athlete participation reform by the NCAA. 2. Will the NCAA use Title 9 to create transgender subdivisions to not erase biological women and their records?

You Gotta Strip for the Title to Beat Your Rivals

#LetsTalkAboutItRIP John Madden, Raiders and football legendDivision/playoffs pictureHall of Fame finalists for the modern era: https://www.espn.com/nfl/story/_/id/32964776/demarcus-ware-andre-johnson-devin-hester-15-pro-football-hall-fame-finalists?platform=ampTop-3 end of the year football moments#CollegeFootballNews5 bowl games canceled UCLA controversy over how they backed out of the Holiday bowl last minute vs North Carolina StateSEC 1-5 in bowl season play. Mountains West 5-0 in bowl play. Record for their conferenceDakereon Joyner, WR, South Carolina: 9-of-9, 160 yards, one touchdown; 10 carries, 64 yards. Shane Beamer gets a Mayo bath#TakeOrTangentPatriots running back Brandon Bolden admits he had cancer in 2018Trent Williams also opens up about beating his terminal cancer diagnosis. https://www.nfl.com/_amp/49ers-trent-williams-return-to-being-nfl-s-top-tackle-powered-by-gratitude-afterFantasy Football playoffs#TouchdownOrTurnoverMike Golic Jr dipped an Oreo in mayonnaise at the Mayo bowlBig Ben says he's preparing like his MondY night game against the Browns wil be the last Steeler home game of his careerKyle Pitts is 128 yards away from breaking Mike Ditka's rookie receiving record for tight ends#UnnecessaryToughnessRants

Goatman Stole Your Phone in the Valley Too? ft Journalist Phil Jones

#LetsTalkAboutItSpecial guest Phil JonesThursday night footballEveryone has Covid in the NFL now. It's almost like HPV but not really#CollegeFootballNewsNational Signing Day history made by Deion SandersPeople were hating on Jackson StateTransfers galore#TakeOrTangentThe late Vincent Jackson had CTE 2 stage Phillip Adams had severe CTE. Killed himself and other people in his home Amazon removes Drake from Larry Hoover performance#TouchdownOrTurnoverDeAndre Hopkins in IRDolphins sign Damon Arnette NFL to allow head coach interviews two weeks before the season ends.

From Westchester with Love and Car Tacos

Kenny had no phone for two days so this episode actually took place on Thanksgiving. Sorry. Also Pete got charged $90 for melted Cold Stone Creamery Ice Cream via Uber Eats. We talked all three Thanksgiving games and the breaking news of the NFL and College football. Be thankful we take no days off, even when others say the same and then take the day off.

Special guests from Courtside Radio Eric Lambkins II and Alexander Hymes drop in to talk Thursday Night Football, the FUTURE of Seattle Seahawks QB Russell Wilson, Pete Carroll, college football and the occasional take or tangent. Follow us on all platforms at www.touchdownandtangents.com as well as to stream our archives.

If You're Gonna Muckbang at a Festival, Bring an EpiPen

We talked about Odell BeckhamJr to the Rams and how we've predicted all the Rams moves for the past year or so. Salute to Les Snead. We talked the Astroworld tragedy and more waiver news like Desean Jackson to the Las Vegas Raiders. College Football news elaborated on the Playoff standings, the Jimmy Lake suspension, some high school football and of course SEC politics. Take or TangentTouchdown or TurnoverUnnecessary Toughness Rants

#LetstalkaboutitHenry Ruggs III DUI tragedy Aaron Rodgers lied with omission about being vaccinated and caught Covid this weekVon Miller traded to the RamsThursday Night Football: Colts Vs JetsDerrick Henry injured. Possibly out for year with foot injuryAdrian Peterson signs with Titans#CollegeFootballNewsTCU fired Gary PattersonGeorgia projected 1st round linebacker Adam Anderson suspended pending rape allegationsTexas assistant coach girlfriend's pet monkey allegedly bites a kid during Halloween. You read that properly. UCLA freshman defensive lineman under investigation after video and audio of him threatening to beat people up in an elevator comes out. San Diego State no longer undefeated USC receiver Drake London out for year with fractured ankleGeorgia State hires Clay HeltonCongress wants law that will change the way NCAA investigates it's member schools. #TakeOrTangentJameis Winston out for year with torn ACLTRADE DEADLINE winners and losersHawthrone, Lawndale, Leuzinger and Serra all made the playoffs in high school football#TouchdownOrTurnoverOdell Beckham Jr vs the Cleveland BrownsInglewood high catches criticism for beating Morningside 106-0 last weekDesean Jackson got waived by the LA Rams an is now a free agent. #UnnecessaryToughnessRants

#LetsTalkAboutItOn the latest episode of white people getting exposed for their racist bullshit, The Las Vegas Raiders FORMER Head Coach Jon Gruden gets fired only when his homophobic and misogynistic emails from 12 years ago to Bruce Allen get leaked. The emails where he made racial attacks on NFLPA Director DeMaurice Smith lips and intelligence weren't enough to garner much outrage at first. This backlash is the cause of the WTF investigation that's going on. There's over 6,000 emails. Tampa Bay Buccaneers remove him from their Ring of Honor. Defensive end Carl Nassib takes a personal day. Thursday Night Football Juju Smith-Schuster out for season with dislocated shoulder. Talks about it at his Foundation dinner.#CollegeFootballNewsDown goes Bama. Texas A & M upsets Alabama. 41-38. Bill O'Brien shit down his leg again Iowa beats Penn State is is ranked 2nd behind Georgia. Georgia plays Kentucky. #1 vs #11LSU loses two more key players for the yearLincoln Riley vs School paperJustin Flowe signs with Marshawn Lynch's Beast Mode Marketing. Currently out for the year with injuryUSC long time Sports Information Director Tim Tessalone to retire. Considered one of the G.O.A.Ts. Coastal Carolina senior tight end Isaiah Likely has 8 catches for 232 yards & 4tds against Arkansas state last week. Set a bunch of school records. Moves faster than Vernon Davis. #TakeOrTangentWTF to retire Sean Taylor's 21 jerseyReports say Urban Meyer never had the teamMyles Garrett builds Halloween tombstone graveyard of opposing QBs.Bengals Packers game had 5 missed kicks and some extra pointsLamar Jackson ascends to historical levels on Monday Night Football comeback#TouchdownOrTurnoverHNFLPA requests full release of emails from WTF investigation Meme of the week: Is Saquan Barkley the Carson Wentz of running backs?Lamar Jackson finally gets roughing the passer call after 2 yearsChiefs got their ass beat by the Buffalo Bills#UnnecessaryToughnessRants

We're Not Mad, Just in Need of Hood Mongolian BBQ

Lets talk about it Locked on Chargers 810Samuel, Herbert, Oline, Defense RbsInjury Updates: Justin Fields in, big ben is hurt, tua out, 820 HS Football 2021 with Connor m. From scorebook live (11 mins) College Football Spot 1-10 minutesUSC UpdateUCLA does what they doKenny football (done by 9:05)Kenny mom 5-10 minutes Touchdown or turnoverNFL keeping taunting rulesRg3 back to washington?Josh sweat 3 years, 40 millb. HJamie Collins held out amid trade rumors9ers workout duke johnson and lamarh millerPete Carroll throws Russell Wilson under the butvstTake or tangent Lamar not a franchise guy says anonymous execRodgers says how do these guys have a platform about naysayersRaiders kicker Daniel Carlson loses to himself in fantasyShermans rep soeaks for itselfRantPOF nomineesContenders or pretenders?

If We Gonna Go to Jail Tonight, Then Stop Caring About the Game Day Section Price ft Phil Jones

#LetsTalkAboutItSpecial guest journalists Crissy Floyd and Alexander Hymes#CollegeFootballNewsCollege football is back in full swingBishop Sycamore scandal Tulsa losing to UC-Davis in footballBoise State 100-yard pick-6 against UCFOHIO STATEHBCU FootballBig 12 focused on expansion with Cincinnati, BYU, Houston and UCFShedeur Sanders, son of Deion Sanders, Jacksonville State QB signs NIL deal with BeatsQuinn Ewers Signs $1.4M Deal. Ohio State Buckeyes early-enrollee QB signs NIL deal with athlete autograph giant GTSMZeb Noland, former grad assistant for South Carolina will be their starting QB#TakeOrTangentShaq college teammate was Odell Beckham SrAdam “Pac-Man” Jones adopted the late Chris Henry's kidsGo on Shannon Sharpe's podcast and the media never talked about the state only covered ESPN app says it only cover him a negative light it's interesting how he adopted this man's children like nobody ever talks about that's all Adam Jones nobody ever says that about that man that he adopted his day teenage kids that's a beautiful shit and it was never heard until he opens his mouth send it to another former player which is why I like I'm thankful we have at least some people come on the show they feel often enough and cover enough to share things like we had yells at you go off in one form or do you call American who are used to play for the LA while Kelcey went on to talk about everything he went throughFormer USC standout Jurrell Casey retires after 10 years and 5-Pro Bowls#TouchdownOrTurnoverNational Champion forward and former Baylor Bear Mark Vital makes Seattle Seahawks practice squadMichael Irvin and Tim Tebow to debate Stephen A. Smith Urban Meyer admits part of his decision for cutting players in training camp. NFLPA is investigating and the Jags made a statement saying no one was cut because of it.Malcolm Butler might retire andTakk McKinley made the BrownsCarolina Panthers traded linebacker Denzel Perryman to the Raiders for late round draft picksJosh Rosen cut again and now a Falcons backup QBs#UnnecessaryToughnessRantsGo check out our website https://www.touchdownsandtangents.com/.