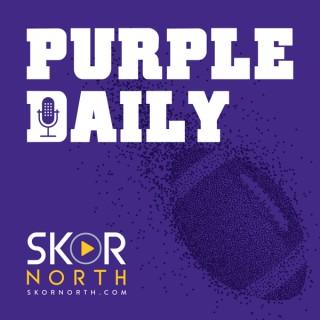 Search for episodes from Purple Daily with a specific topic:

Could Mike Zimmer be the first head coach to be fired?; Will the Vikings cover the spread? And Minnesota Vikings prop bets in Week 2 vs. the Arizona Cardinals.

Would you rather the Minnesota Vikings have Kirk Cousins at $30 million or Taylor Heinicke at $2 million; ??What will the Vikings record need to be at the bye week if they want to make the playoffs; On a scale of 1-10 how much do the Cardinals and our weekly would you rather question?

Blame Mike Zimmer for not leaning into Kirk Cousins

State of Minnesota Vikings offense after Week 1 of the NFL season and the weird Mike Zimmer-Kirk Cousins relationship from former head coach Chuck Pagano; (30:00 )Random Viking of the Week!

Can Minnesota Vikings fix their offensive line?; How do you slow down Kyler Murray; Cam Dantzler's fall from grace; Kellen Mond package and more on the latest Purple Access with Judd Zulgad and Chip Scoggins!

Why does Mike Zimmer get a free pass with Minnesota Vikings? – Realistic Randy!

Minnesota Vikings were a mess in Week 1 against the Bengals from Mike Zimmer, to the rush defense and the accountability with an epic rant from Realistic Randy!

Is Garrett Bradbury's time running out as a starting center for Minnesota Vikings ? It's takeaway Tuesday following the Vikings' loss to the Bengals and turning their attention to the Cardinals in Week 2; KJ Osborn solidifying the WR. 3 position; Kellen Mond being involved; the Vikings being perpetually stuck as average; (26:00) Nerd Football Stat of the week! Also, Packer Vent Line calls sprinkled in after their embarrassing Week 1 loss to the Saints.

Should Minnesota Vikings fans remain calm after a season-opening loss to the Bengals?

Should Minnesota Vikings fans remain calm after a season-opening loss to the Bengals; Expectations against the Cardinals in Week 2; Can the Vikings still win the division?; Is Zimmer the No. 1 problem?; What happened to Cam Dantzler? And what to do long term with Garrett Bradbury?

Minnesota Vikings pie chart of BLAME after their Week 1 loss to the Bengals!; (30:00) Silver Linings after the loss!; (34:00) Surly, You must be Furious with Judd.

Minnesota Vikings fall to the Cincinnati Bengals in overtime in Week 1 of the NFL season. Vikings fans voice their frustrations after the season opener!

Minnesota Vikings quarterback Kirk Cousins and head coach Mike Zimmer finally watched film together?!; Which player would you rather have healthy for Week 1 Christian Darrisaw and Anthony Barr? Should the Vikings take the Bengals more seriously? And our weekly would you rather question on Four Question Friday!

Did Minnesota Vikings make the right decision with Brian O' Neill extension?; State of the Vikings offense heading into Week 1 and Random Viking of the Week!

Mike Zimmer is CONCERNED with Minnesota Vikings depth behind their starters; Will Anthony Barr be ready for Week 1? Vikings-Bengals predictions and more on Purple Access with Judd Zulgad and Chip Scoggins of the Star Tribune.

Minnesota Vikings predictions ahead of their Week 1 matchup against the Cincinnati Bengals; (24:00) Purple Positivity ahead of the Week 1.

We're excited to announce a new addition to the Purple Daily podcast! Mackey & Judd welcome our new weekly contributor and give out depth chart observations, plus the return of Game Show Friday – but on a Tuesday.

2021 Minnesota Vikings: What do the ANALYTICS say?

What do the analytics say about the 2021 Minnesota Vikings? Mackey & Judd invite Eric Eager from Pro Football Focus (PFF) on the show to get answers! Should the offense be more aggressive? Is Kirk Cousins' contract really preventing the Vikings from building a Super Bowl roster? And what are the chances the Vikings win the Super Bowl?

Will Minnesota Vikings be a playoff team in 2021 - VENT LINE

Will the Minnesota Vikings be a playoff team in 2021? Why the defensive line is improved; biggest confidences heading into the season; do the Vikings have a top 10 defense and more! It's Vikings Vent Line.

Minnesota Vikings fans need to PUMP THE BREAKS on a shaky preseason; Why Kellen Mond needs to given as much time as possible to develop; Judd's conservatives write that down show; do the Vikings have depth issues?; Vikings vs. Gophers “moral victories”

Minnesota Vikings have a new punter in Jordan Barry, who does it seem Rick Spielman and Mike Zimmer rotate through so many special teams players; Which overpaid and underpaid quarterback has the best chance to lead their team to a Super Bowl?; Who will be the best player on the Vikings in 2021? And our weekly would you rather question.

Minnesota Vikings head coach Mike Zimmer bragged about “putting out fires” for the last 8 years, so Judd ranked the top five fires he's had to put out; (16:00) Nerd Football Stat of the week!; (31:00) Random Viking of the Week!

Former Vikings beat writers Judd Zulgad and Chip Scoggins have reunited for a weekly podcast that focuses on the Vikings. In this episode, they discuss what the loss of Irv Smith Jr., will mean for the offense and whether the Vikings will use three wide receiver sets more this year? Judd and Chip also get into the Vikings' backup quarterback situation and Kellen Mond's development.

Minnesota Vikings lose tight end Irv Smith Jr. for 4-5 months, likely ending his 2021 season. How big of a blow is his injury to the Vikings this season?

Minnesota Vikings predictions: Kelen Mond, Back up QB's, Week 1 vs. Bengals and more! – Write That Down

The Minnesota Vikings finalize their initial 53-man roster and Mackey & Judd react to the news as cuts come down.

Should Minnesota Vikings have traded for Gardner Minshew, who was traded to the Philadelphia Eagles over the weekend for a 6th-round pick; (13:00) Pie Chart of Blame!; (29:00) Silver linings; (34:00) Surly, You Must be Furious!

The Minnesota Vikings lost Irv Smith jr. to an injury and will miss the start of the regular season and Harrison Smith signs a contract extension in this emergency episode of Purple Daily.

Who should backup Kirk Cousins? Can the Minnesota Vikings offense take more shots down the field? Will Everson Griffen bounce back? And 2021 record predictions with guest listeners Logan and Jason!

The Minnesota Vikings wrapped up their preseason schedule on Friday night with a loss to the Kansas City Chiefs, and Mike Zimmer was not happy about the current state of the offense or depth of the team. How many of his concerns are valid? And how many just magically disappear once Justin Jefferson, Adam Thielen and Dalvin Cook come back? Plus, will the Vikings make a trade before Week 1 to bolster the roster? And is Kellen Mond good enough to be the backup quarterback?

Is Garrett Bradbury taking the next step in pass protection?; why Minnesota sports fans are sometimes misguided with the Vikings; What does the “guy on the left” do?; Vikings preseason woes and more on this edition of comments from YouTube.

Should Minnesota Vikings try to trade for Drew Lock to backup Kirk Cousins?; Andrew Luck is throwing to high school kids, is he planning an NFL comeback?; Why is Cam Dantzler falling down the depth chart; Alan Page was rejected for Twitter verification on a Four Question Friday!

Is Mike Zimmer changing his philosophy with Minnesota Vikings?

Will Mike Zimmer let the Minnesota Vikings offense be more aggressive in 2021?; (16:00) Random Viking of the Week!; (24:00) Harrison Smith and Brian O'Neill possible contract extensions, how much will starters play in the preseason finale and Adam Zimmer running the defensive plays.

Minnesota Vikings more intriguing storylines on the debut episode of Purple Access with Chip Scoggins and Judd Zulgad as the Vikings' season approaches. Judd and Chip also get into Klint Kubiak's play-calling, Everson Griffen's return and what the Vikings will do at backup quarterback.

Minnesota Vikings are bringing back defensive end Everson Griffen!; (08:00) pie chart of blame after a preseason loss to the Indianapolis Colts; (25:00) silver linings in the loss; (28:00) Surly, you must be furious!

Vikings-Colts preseason recap: Where is the offense?

The Minnesota Vikings offense has been extremely underwhelming this preseason. Mackey & Judd start with their thoughts on Kirk Cousins, Jake Browning and Kellen Mond, and then they dive into the performances of key offensive linemen Oli Udoh, Wyatt Davis, Rashod Hill and Dakota Dozier. Plus, who solidified jobs in this second preseason game?

Will Kellen Mond win the backup job against the Indianapolis Colts?

Minnesota Vikings preseason preview vs. the Indianapolis Colts and what will be the biggest takeaway; Assessment of Why Your Team Sucks from diehard Vikings fan Drew Magary; Mt. Rushmore of all-time Minnesota Vikings backup quarterbacks and what would your last meal be?

Minnesota Vikings need to have high expectations for 2021

Are excuses starting to pile up for the Minnesota Vikings?; Are we Mike Zimmer fan boys?; Is Kellen Mond closer to being NFL ready than we think?; Bring in Josh Rosen?

Minnesota Vikings pie chart of blame after their first preseason game against the Denver Broncos! Surly You Must be Furious with this offensive line Judd!

Mackey & Judd break down the Minnesota Vikings' 33-6 preseason loss to the Denver Broncos! It was ugly... And Judd says Jake Browning is not good enough to be Kirk Cousins' primary backup. Nor is Kellen Mond right now. Plus, how concerned should we be about offensive line and general roster depth? Why didn't Oli Udoh play?

Why Minnesota Vikings dropped the ball with their 2021 offensive line

Is Christian Darrisaw's injury not that big of a deal; Is the offensive line competition a good thing for the Vikings? Why didn't the Vikings keep Riley Reiff or sign Joe Thuney?; Declan's weird obsession for Drew Lock; Reckless speculation on backup quarterback options and more on this edition of comments from YouTube.

Which Minnesota Vikings players will step up in NFL preseason debut?!

Which Minnesota Vikings players were most excited to see play in the preseason opener against the Broncos and which player we do NOT want to see play; Which established starting quarterback falls off a cliff in 2021 and our weekly would you rather question on a Four Question Friday!

Minnesota Vikings rookie Christian Darrisaw was reportedly seeing a specialist on Wednesday as he recovers from core muscle surgery. Should the Vikings sign a free agent tackle like Russell Okung?; (16:00) Quarterback takeaways from the joint practice with the Denver Broncos; (22:00) Michael Pierce continues to impress at training camp; (30:00) Greg Joseph continues to connect on field goals; (33:00) And Judd's final statement on officiating focusing on taunting penalties.