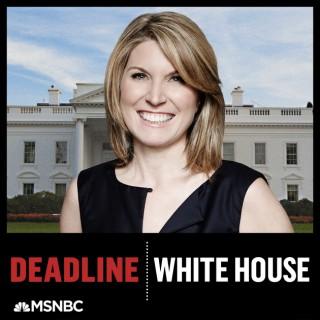 Drawing on years of experience as communications chief for President George W. Bush and senior advisor for the McCain-Palin campaign, Nicolle Wallace provides political insight and clarity on where the decision-makers stand on complex issues Join her for analysis and discussion with the key newsmake…

Search for episodes from Deadline: White House with a specific topic:

"The territory is going to get more uncharted"

“Sometimes silence is seen as agreement”

"Scorpions in a sock"

"A little chill down your spine"

"Straight into that brick wall”

"Totally dead in the water"

“The world's tiniest violin is playing"

"The frat is in charge of the campus right now"

“Everybody hears the dog whistle”

"Has come to fruition here"

"All that stinks to high heaven"

“A grab bag of fraud”

"Rules for thee, not for me"

“You can only be disingenuous for so long”

“Brought a pool noodle to an axe fight”

"Not just a sin of commission. It's a sin of omission"

"When they go low, we're having none of it"

“Why can't we walk and chew gum at the same time?”

“Swimming in a sea of extremist muck”

“There's either denial or there's deflection”

“Like a lion breathing down the neck of an antelope”

“At least mob bosses have loyalty to their folks"

“Someone is going to have to know when enough is enough”

“There are no coincidences”

“There aren't two sides to a lie”

“Nobody should be surprised”

“We are all being robbed at the same time”

“We passed the ‘break glass in case of emergency' moment”

“One for the history books"

“It only gets deeper and darker”

“A trip down a minefield”

Nicolle Wallace reacts to the Jan. 6th panel's hearing on Trump's push for the DOJ to legitimize his lies.Joined by: Claire McCaskill, Ari Melber, Neal Katyal, and Jackie AlemanyNOTE: Today's episode was shortened due to the Jan. 6th Select Committee hearing.

“A fast slide down a slippery slope”

“Get some spine, jellyfish”

"We have to grade him on a curve"

“An alternate universe of hate”

“The wrong side of history”

“Still screwing the wings on the airplane as they fly it”

“Riding in on a wave of fury and grief”

“Like a guy with aluminum foil on his head”

“This is not just a game that's played in Washington”