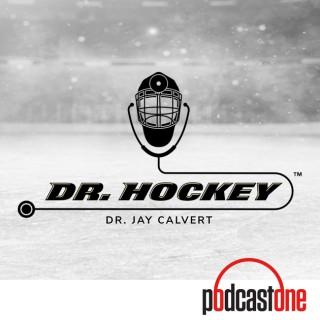 Dr. Jay Calvert is a world-renowned plastic surgeon with a passion for rhinoplasty... and HOCKEY! Welcome to the Zamboni Zone. No NFL, NBA, or MLB to find here. Everything NHL – exclusive guests, goals, fights, Canadian slang, and the road to the Stanley Cup! Doc Emrick graced this podcast.

Search for episodes from Dr. Hockey with a specific topic:

Dr. Jay Calvert & Dr. Jason Berkley break down the first round and make their picks for Round 2! The docs talk officiating concerns, automated refs, the helmet rule, the biggest disappointment so far, and Round 2 predictions. Plus, is it time to blow up this Pens team? Will anybody stop Tampa???

Dr. Jay Calvert & Dr. Jason Berkley chat with Detroit Red Wings Legend - Darren McCarty! Darren & the docs talk about his love for the city of Detroit, the Dylan Larkin Captain debate, his top three picks to replace Blashill & co., Stanley Cup predictions, and his mission to spread awareness for Mental Health! Darren discusses his own personal triumphs over alcoholism & Mental Health issues, breaking the stigmas around Men's Mental Health, his work with the NFL & NHL, and this Thursday's event with fellow Detroit legends for FundRecovery.Org! Go to FundRecovery.Org. to learn more! Fund Recovery serves athletes, veterans, their families, and fans seeking assistance for mental health or addiction issues. We do this by filling the financial gap between the cost of receiving professional help and the ability for someone to pay. Fund Recovery provides monetary aid for people seeking positive change.

Dr. Jay Calvert chats with hockey journalist & author Scott Morrison about his brand new book "1972: The Series That Changed Hockey Forever" - all about the 1972 Canada-Soviet Union Summit Series! Dr. Calvert & Scott deep dive into the perhaps the greatest series in the history of hockey, and lasting effect it's had on the game we love. The guys also discuss the hot start to this year's playoffs, the playoff format debate, & his thoughts on the Leafs-Lightning series. Follow him on Twitter @SMorrisonMedia. Scott Morrison has provided cogent and colourful hockey analysis since his start in 1979, covering the Maple Leafs and NHL for the Toronto Sun. Having reported and provided analysis for Sportsnet, Hockey Night in Canada, and CBC Television and Radio, while making regular appearances across the sports-radio dial, he brings a trusted and measured voice to the hockey-media landscape, twice serving as president of the Professional Hockey Writers' Association. He has written numerous books, including 100 Years, 100 Moments: A Centennial of NHL Hockey, and Catch 22: My Battles, in Hockey and Life with Rick Vaive. In 2006, he received the Hockey Hall of Fame's Elmer Ferguson Memorial Award.

Playoffs are set! Dr. Jay Calvert & Dr. Jason Berkley discuss the Red Wings firing the coaching staff, lottery pick, & the first look at the playoff bracket! Who's out in the first round? Who will play for the Cup? Do you agree with the docs?

Dr. Jay Calvert & Dr. Jason Berkley chat with former NHL'er & current play-by-play announcer - Peter McNab! The docs and Peter discuss his family history of hockey players, the evolution of the game since his playing days, Mike Milbury beating a fan with his own shoe, Fight Night at the Joe and his perspective from the booth, and of course his Avs. Are the Avs finally ready for a deep run? Plus, a Gabriel Landeskog update, Nazem Kadri's career year, and how he sees the playoffs unfolding this year!

Dr. Jay Calvert & Dr. Jason Berkley discuss Jay's escape from death by hotel fire in Bergamo, Nathan McKinnon's fight, trade deadline winners, the Pens stomping the Wings 11-2, whether it's time for a coaching change in Detroit, a peak at the playoff picture, and only ONE slap reference. Grease it.

CCM Doesn't Get It

Dr. Jay Calvert & Dr. Jason Berkley discuss CCM's recent decision to remove Russian-born players from their global marketing campaigns, & we think that's ridiculous. Plus, the docs look at some Calder Trophy candidates, this year's playoff picture, and answer some important questions - Is Conor McDavid the Matthew Stafford of the NHL? Who else needs to be moved before the trade deadline? Will Chicago move Fleury, & where should he go? Can Tampa Bay win the Cup this year?

Is Tuukka Rask a Hall Of Famer? Who will trade for Fleury? It's GOALIES with BLUE! Dr. Jay Calvert & Dr. Jason Berkley invite back former NHL goalie John Blue to talk about the goalie movement around the league! Blue points out favorite goalies this season, Tuukka Rask's slide, will Tristan Jarry have the staying power in Pittsburgh, Rangers' Igor Shesterkin(+ Doc Emrick's pronunciation guide), good goalie tandems, who's the next big goalie, potential moves before the March 21st deadline, Fleury's movement, Carey Price, Sergei Bobrovsky, plus the guys look at this year's playoff picture and make a steak dinner bet!

Dr. Jay Calvert invites back former NHL'er, current Florida Panthers broadcaster & NHL Network host - Bill Lindsay! The doc & Bill talk about the hot Panthers, Calgary's recent tear, Toronto's turnaround, offseason training now vs then, trade rumors, and neck injuries. Bill tells the story of nearing losing his life after crushing his larynx on the ice, the tragic death of high school hockey player Teddy Balkind, and what the NHL can do to protect the neck. Is this year's Stanley Cup champ residing in Florida!?

Coaching Changes... do they always work? Dr. Jay Calvert & Dr. Jason Berkley are back at to talk about the recent Coaching Changes around the league! The docs dive into the absolute disaster that is the Montreal Canadiens, Oilers firing Dave Tippett, Jason works in a Red Wings discussion, Coyotes sign multiyear deal to host home games at the Arizona Sun Devils' new arena 5,000 seat venue, and Brad Marchand does it again... again. Will McDavid stick it out in Edmonton?

Dr. Jay Calvert & Dr. Jason Berkley discuss the Arizona Coyotes' proposed move to ASU's new 5,000 seat arena for the next few years, which begs the question... how much longer do the Coyotes have in AZ? The docs discuss potential landing spots for the Coyotes based on population size, how the NHL's handling the COVID postponements, Calder Trophy candidates, Friday's Pens-Wings game, thoughts on the Red Wings moving forward, Leon Draisaitl getting asked stupid questions, and Jay's appearance on Mike Milbury's podcast - Mike Mulbury's Fight Club!

How To Save A Life with Nadia Popovici

Dr. Jay Calvert & Dr. Jason Berkley chat with Seattle Kraken fan Nadia Popovici about her incredible story of spotting a cancerous mole on the neck of Vancouver Canucks' Assistant Equipment Manager Brian "Red" Hamilton, & how she intervened. Truly a life saving find! Taking place on October 23rd at the Seattle Kraken's first-ever home game against the Vancouver Canucks, Nadia's brave actions saved a life! If that's not a Dr. Hockey story, I don't know what is! Nadia shares her amazing story, the ABCDE's of Melanoma, her plans for med school, her switch from being a Vancouver Canucks fan to a Seattle Kraken fan (as many North Westerners have), Stanley Cup picks, and more!

Happy New Year!! Dr. Jay Calvert & Dr. Jason Berkley are back and so is the NHL! The docs discuss the recent Omicron surge that shut down the NHL thru the holidays, the NHL's decision to opt out of the Olympics & Brad Marchand's response on Twitter, where to reschedule the remaining games, Stevie Y's comments on testing, fake cards, and predictions for how 2022 will unfold! Is Brad Marchand right? Let us know on Social Media @DrHockeyPodcast

Dr. Jay Calvert & Dr. Jason Berkley chat with former NHL'er Jay Caufield! Jason tried to offend Jay immediately with his Red Wings gear, the Jay's relive the glory of 2009 despite Jason, Jay takes us inside his breakdowns, this year for the Pens, the Crosby effect, helping Mario complete the "five goals in five ways", comparing the Pens' Cup teams, next moves for Pittsburgh, the future for Conor MsDavid, & more!

Dr. Jay Calvert chats with former New York Rangers defencement & current analyst for MSG - Dave Maloney! Jay & Dave discuss the special year for the Rangers, why they moved on from Gerard Gallant, what's sparked the change in play, Chris Kreider, Igor Shesterkin, and what they need to do to keep it rolling! Plus, other teams around the league that impress him, developing young players, his Cup contenders, and are the Ducks for real?

Dr. Jay Calvert & Dr. Jason Berkley chat with Former NHL'er & current Florida Panthers Play-by-Play Announcer Randy Moller! Randy shares how he became the first former player to transition to the announcing booth, identifies the key factors in the success of the NHL leading Florida Panthers, gives his thoughts on how the aftermath of Coach Q, tells us about his recent battle with COVID-19, & more! Randy also shares stories from his playing days with the Quebec Nordiques & New York Rangers(amongst others) - the days of fewer helmets, Moose DuPont, ash trays in locker rooms, & concrete boards! Plus, Randy shares his thoughts on the Stanley Cup race.

Dr. Jay Calvert & Dr. Jason Berkley take a look at the biggest surprises so far this season! Finally, Jason has something to be happy about with his Red Wings, plus the docs discuss the LA Kings' 6-game winning streak, Ryan Getzlaf passing Teamu Selanne as all-time leading scorer for Anaheim Ducks, other surprising teams, the current slide of the Arizona Coyotes, and whether or not Ovechkin can catch the Great One!