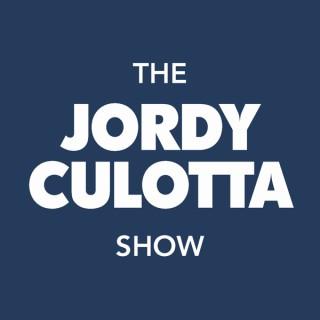 A daily podcast brought to you by Jordy Culotta. Laughs, good conversation, and luke-warm takes included.

Search for episodes from The Jordy Culotta Show with a specific topic:

WEDNESDAY POD! The Sky is still Falling at the Culotta Show! Joey Mulinaro gives us some Saban and Luck Impersonations! Mailbag Segment #CallDerek! HOW BIG IS DRAKES ****?

The Sky Is Falling Over At The Culotta Show, As Another Five Star Commitment From Louisiana Goes Out Of State. What Will Have To Happen To Make The LSU Collective Wake Up? Also Ben Mintz!

HAPPY FRIDAY THE 13TH! LSU Football has some major targets in the state of Louisiana for the class of 2023 and Brian Kelly has taken a more rational approach to recruiting lately we discuss what type of player the Tigers are looking at in this year's recruiting class for Louisiana. The NFL had its full schedule release for all 32 teams last night and the New Orleans Saints schedule is out, they will face 3 division opponents in the first five weeks of the season. Their over/under projected win total from Vegas is 7.5 wins, we think that number can be slightly low for this new look Saints team. The South's favorite son, Barstool Ben Mintz joins the show to discuss the latest on him as he has been living the dream in South Louisiana! He gives his outlook on the LSU baseball team as his team the Ole Miss Rebels are in town to face LSU in the Box this weekend for an SEC West showdown! FOODIE FRIDAY and MORE!!

Happy Belated Mother's Day! We recap Hot Arts Cool Nights at the NUDL! How bout them Culotta Crawdads!? LSU Baseball got the series win over Alabama in Tuscaloosa this weekend, Wilson Alexander from the Advocate joins the show to where LSU goes from here and what he looks forward to seeing from the Tigers as they make their final push for a national seed! Jordy has some advice for dads with young kids in sports as he witnessed some bad parenting during an AAU tournament over the weekend! AND MORE!!!

MAY THE 4TH BE WITH YOU!! Kayshon Boutte inks an extension with Gordon McKernon and we discuss where LSU has gone from where it started in the NIL space. Pitt wide receiver Jordan Addison officially entered the transfer portal yesterday and this raises more questions about the state of college football with the addition of NIL. Jake Madison from LockedOnPels podcast joins the show to discuss the Pelicans playoff push and where the team goes after a great season with a young roster! Jake also discussed the futures of Pelicans young stars Zion Williamson and Brandon Ingram. JORDY'S TAKE ON SEASONING OVER CRAWFISH, MAILBAG, And MORE!!!

Happy Tuesday! Big news in the NFL and south Louisiana yesterday as the New Orleans Saints were reportedly in talks to sign former LSU and New Orleans native, DB Tyrann Mathieu. On Tuesday morning those talks became official and Louisiana's favorite football son is coming home! Ross Dellenger of Sports Illustrated released his latest article about NIL in college football, highlighted in the article was LSU WR Kayshon Boutte and LSU alumni and super lawyer Gordon Mckernan and the deal they struck to keep the star WR in Baton Rouge. ESPN's Mike Triplett joins the show to discuss the Saints move to bring Tyrann Mathieu home to New Orleans and post-draft analysis after the Saints had a nice draft last week! And MORE!!

Happy Monday Folks! The NFL Draft wrapped up on Sunday and LSU Football saw 10 players get drafted, it makes us wonder what Ed Orgeron was doing as the Tigers had two below-average seasons after winning the National Championship in 2019. LSU quarterback Garrett Nussmeier joins the show to discuss how he feels after spring wrapped up and the things he's looking forward to working on before the team gets back together for summer workouts. LSU DB Greg Brooks stops in the studio to discuss what life has been like since he transferred to LSU from Arkansas! Tyrann Mathieu has decided to come home as the New Orleans Saints are putting together the final pieces to bring the former LSU star back to his hometown to don the Black and Gold! and MORE!!

Friday Pod! The Pelicans Got Blended, But The End Result Will Be A Delicious Smoothie Next Year. Jordy's Next Muse, LSU Basketball's New Head Coach Matt McMahon Joins The Show & Will Clapp!

Former San Antonio Spurs guard and current New Orleans Pelicans color analyst Antonio Daniels joins the show to discuss the Pelican's first-round battle with the Phoenix Suns.  Daniels gives us a peek inside the Pelicans locker room, how close the team is, and what makes Willie Green a great up-and-coming coach. He also gives us some insight on one of the fan favorites on this Pelicans team, Jose Alvarado and the personal relationship the two share! And MORE!

Jam-packed day on the Culotta Show as it is draft day and we discuss some possible landing spots for LSU standouts like Derek Stingley Jr. and Damone Clark. Former LSU linebacker Lionel Turner joins us to discuss the video of a young Nick Saban and Will Muschamp ripping into the senior linebacker from Walker, Louisiana. The New Orleans Pelicans young squad and rookie coach Willie Green are locked in a round one playoff battle with the Phoenix Suns, Fletcher Mackel of WDSU New Orleans joins the show to tell us what he expects to see from Coach Green and his team moving forward as the Pelicans will play host to the Suns tonight in the Smoothie King Centea as they push towards forcing a game 7. It's Draft Day and the New Orleans Saints have two first-round picks to play with, Nick Underhill of NewOrleans.Football joins the show to discuss the Saint's draft strategy and where the team turns in its first season under a new direction since Sean Payton announced his retirement in January 2022. LSU DB Mehki Gardner joins the show to discuss what his journey has been like as a transfer from Louisiana-Lafayette and what his impression of the new staff at LSU. And MORE!!!!

Mark Emmert steps down as the President of the NCAA and we want to know what that job actually entails. Jordy gives his suggestion on who he believes will step into the job and where the NCAA is going moving forward. Former LSU quarterback Jarrett Lee joins the show to discuss all things LSU Football, what happened in 2011 under Les Miles, and what it would have been like to play quarterback in the 2019 offense that transcended college football. LSU safety Jay Ward joins the show to discuss what he's looking forward to after his final spring! The NBA Playoffs continued last night and the New Orleans Pelicans dropped Game 5 against the Phoenix Suns but they showed a lot of promise to push the series to 7 games. And MORE!!

The Brooklyn Nets were swept last night by the Boston Celtics and the criticism of Ben Simmons both locally and nationally is growing due to Simmons lack of awareness when it comes to his accountability as a professional. Class of 2023 U-High Five-Star linebacker Jaiden Ausberry joins the show to discuss the latest in his recruitment and what will factor into his college decision. Ausberry is the son of LSU Athletic administrator Verge Ausberry and has been around the LSU Football program since he was a little boy. The New Orleans Pelicans gear up for game 5 against the Phoenix Suns in Phoenix and Noah gives us his take on what he is looking forward to seeing from each team as the series inches closer to going the full 7 games. And MORE!!!

LSU had its annual spring game on Saturday under the direction of new head coach Brian Kelly and as it seems every season, LSU is in a heated quarterback battle with Myles Brennan, Jayden Daniels, and Garrett Nussmeier. This weekend didn't clear much up from the quarterback race according to Brian Kelly but Jordy thinks that this is just the head man playing politics to keep all the guys happy. Garrett Nussmeier is the quarterback that has been standing out to the crew, Nussmeier seemed to have command of the offense and lead the charge during the game, but we won't count out Jayden Daniels and Myles Brennan. Joe Burrow, Jamarr Chase, Justin Jefferson and many other stars from the 2019 National Championship team were in town for spring game and huge recruiting weekend! Billy Embody joins the show to discuss what he saw from the spring game and what he's heard from recruits about their weekend in Baton Rouge. The New Orleans Pelicans took another game in the Blender from the Phoenix Suns tying the series 2-2. Garrett Rattler from NewOrleans.Network Pels Pod joins the show to discuss where the Pelicans go moving forward and Zion Williamson news. And MORE!!!

Friday Pod! We Flock The Flock Up With Brooke Kirchhofer as The Pelicans Look To Put Some Vitamin D In The Blender Tonight. We Debate What Happens To LSU's QB Room After Spring & Who Will Be OUT?