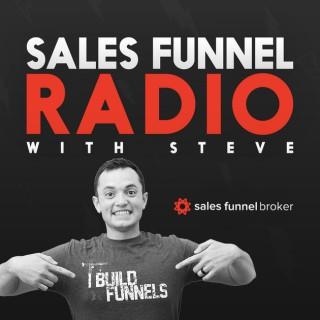 Search for episodes from Sales Funnel Radio with a specific topic:

Hi everyone, welcome back to Sales Funnel Radio! Today we have a BIG announcement coming up, something I’m very excited about! It’s a new project that I think you’ll love if you are looking to take your marketing game to the next level. We’ll go more in-depth in this episode, so please buckle up for the big launch and tune in to hear more!

SFR 301: Business and Personal Lessons on My Journey to $5 Million

In this episode, I share the lessons learned at each million dollar mark over the last two years.

SFR 295: The Day After The Million Dollar Day

SFR 288: The Two Worlds Of Marketing

SFR 268: Myron Golden Teaches WHAT Keeps Us Back...

SFR 239: The Most Common Systems I Build POST-Revenue...

SFR 237: Examples Of Offer Creation In Each Industry...

SFR 236: Examples Of Sales Messages In Each Industry...

I frequently get interviewed by new content creators. The purpose of this episode is that EVERYTHING I show you is completely learnable and doable by YOU… Every Tuesday, I leave my morning open to go on anyone's show.   So, once a week, I just wake up, get ready, and check my calendar to see who's scheduled time for me to get on their show. I typically do two-three interviews every Tuesday, and I don't even care who with. It helps me: Keep connected with the audience Understand what peoples' questions are Understand who the other influencers-to-be, or current influencer are My calendar is pretty packed up, but if you want to book a slot, then go to interviewsteve.com. Recently, I had an amazing person set up a time with me. It was her first EVER show… and she just jumped in and asked me the MOST amazing questions. THE POWER OF PUBLISHING If you've listened to my podcasts at all and you've NEVER heard me say, “Everyone should publish!” I think you're probably lying. I say that all the time, and it's something that’s changed my life. I am massively convinced that if you want to increase your income, especially on the internet... The checklist is very simple: