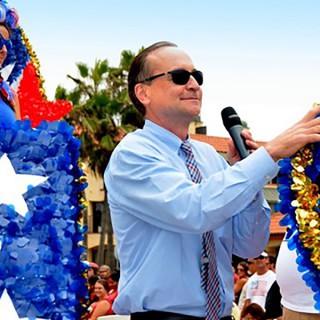 Tim Conway Jr. can be heard live Monday-Friday from 6-10 p.m. on KFI AM 640, and everywhere on the iHeartRadio App. Follow on socials @Conwayshow Follow the show: @ConwayShow Tim Conway, Jr. was born and raised in Los Angeles and is proud to admit that he survived 10 years in what he can only describe as a “youth detention center”, better known as the Los Angeles Unified School District. He spent his childhood around Santa Anita, Hollywood Park and Del Mar Racetracks with his father, Tim Conway (Carol Burnett Show), four younger brothers and older sister. During his early career, he produced his own internet radio show and thanks to its popularity, he was offered an opportunity to host a radio talk show on 97.1 KLSX-FM. Over twelve successful years, Conway’s show became famous for providing Southern Californian’s with a wide variety of entertaining topics including live police chases, Hollywood craziness, and sharing current events with a twist of humor. In 2009 when KLSX switched to an all-music format, Conway joined forces with KFI-AM 640, the No. 1 news/talk radio station in the country, to continue bringing his unique and comedic perspective to topics like politics, gambling, and more. Fans love his knowledge of history and his down-to-earth take on life; and also enjoy the refreshing levity he delivers. Throughout his career, Conway has been featured on numerous television programs (Fox 11, CBS, NBC, ABC) and has also received various industry honors including: a Golden Mic award, an Edward R. Murrow award, and a Marconi nomination for “Personality of the Year” (2016). When he’s not busy entertaining listeners, he enjoys spending time with his family, supporting local charitable organizations, and hanging out at the racetracks!

Search for episodes from Tim Conway Jr. on Demand with a specific topic:

Hour 1 | Something Has To Change @ConwayShow

Hour 4 | List Of Firework Shows In The City @ConwayShow

Hour 3 | Time To Get A Generator @ConwayShow

Tim and mark T. Talk baseball, getting emotional with old age // Sheron Expresses Her Annoyance With Her Broken Pc Program! / Rearranging Kitchenware // Mark T Gets Pulled Over By Chp---did He Get A Ticket? // Tim talks BEER / The Three Stooges

Renters unsure if they can make rent and buy food because of inflation / Australian Homes Over One Million Homes Sit Vacant as Elderly Homeless Rates Rise // Tim And Mark Question Producer Dayna About The Military // Tim Talks About His Experience with Hypnosis & Mark's Experience with Acupuncture // Charlie Sheen song, Daughter's Only Fan— “Keep mey daughter off the pole”

Tim & Mark talk Gascon on El Monte, San Francisco DA-- Are people too forgiving? //Tim & Mark talk about being a DJ in college, best radio memories throughout their history // Howard Stern / Stretch your dollar- Side gigs—drive around getting // Hollwood Walk of fame--New addition Holly Robinson Pete - Wife of Rodney Pete

Hour 4 | Getting Into The Radio Hall Of Fame @ConwayShow

Welcome to the 2022 electronic Olympics. For our first contest, Tim and Sheron will attempt to sync up their ipads. Later, we discuss Crozier getting in an accident with a Tesla, Sheron's got a brand new bag, and we pay some respects.

Hour 2 | What's in that Bag? @ConwayShow

Mushrooms are replacing cow hyde when it comes to the leather of the future. Join us as we get into the NHL Stanley Cup, Hotdogs, and a very important question. Do you like your bed sheet tucked?

Hour 3 | Who's Coming to Dinner? @ConwayShow

Horse protesters storm the Griffith Observatory? This hour we discuss the tough decision to get your baby vacced, the Thompson family (Klay Thompson), and we've got a meddling Air BnB.

Hour 4 | Is That Supposed to Say Tuck? @ConwayShow

In this last hour of today's show we get impressed by a 15-year-old , follow a motorcycle chase in Commerce, and the new cheat code to eating otter pops.

Father's Day is coming up and can you believe that there are 20 holidays that come ahead of it in America's eyes. Join us as we discuss bloodhound recruitment in the police department, Wild rivers reopening during a drought and living life with the lions.

We're covering the fire in Jurupa Valley. Later, we discuss the mayor's race with Elex Michaelson, Whip it to see: "How many WeHos can fit in SB County, and an El Monte Vigil for a fallen officer.

The party begins a year early as Coachella tickets go on sale. Later, we discuss Justin Beiber's condition, Stephen Colbert's staff apprehended, Sheron's recommendations when visiting her hometown, and a Fundraiser for the family of the fallen officer.

Hour 4 | What A Weird Dude @ConwayShow

We're joined by Joe Buscaino discussing the shooting in El Monte along with the Elks club (Shhhh...Members only). Later, we get into Chipotle's vegan spin, the crypto currency crash, and it just so happens to be the 28th anniversary of the OJ trial today!

Hour 3 | Use Your Disney Voice @ConwayShow