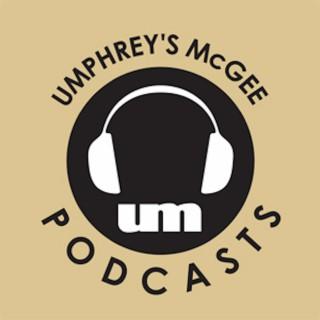 Umphrey's McGee is one of the most exciting, explosive forces in the progressive rock scene today. With influences ranging from Frank Zappa to The Beatles to Miles Davis to Tortoise and the ability to invoke visions of each band in one broad musical stroke, they will surprise you at every musical t…

Search for episodes from Umphrey's McGee Podcast with a specific topic:

Podcast #153 - Brutalize Me With Music

00:00 Walletsworth 06:41 Nothing Too Fancy (6.11.04 - Bonnaroo, Manchester, Tennessee) 24:33 Plunger > 39:32 Intentions Clear > 48:22 Blue Echo (6.16.06 - Bonnaroo, Manchester, Tennessee) 59:04 moe./UM switch jam* > 64:23 …And Justice For All 72:15 40's Theme (6.11.04 - Bonnaroo, Manchester, Tennessee) Total Broadcast Length 81:32 Notes: * full-band segue with UM replacing members of moe. This week UM returns to Bonnaroo for their 7th appearance, and their first late-night since 2006. The 2004 show stands as one of the most important shows in the band>s history, playing for upwards of 20,000 people for over 4 hours, with a little help from moe. at set break. After moe.'s cover of Metallica's Enter Sandman with UM manager Vince Iwinski on vocals, UM returned to stage and answered with some Metallica of their own with …And Justice For All. The 2006 show had the band in front of another overwhelming audience and they had no problem stretching the improv out, including the debut of a fan-favorite recurring "Jimmy Stewart" dubbed "Mrs. Robinson's Strut."

Podcast #125 - The Evolution of Ocean Billy