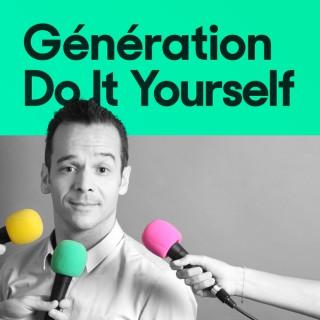 Génération Do It Yourself

Search for episodes from Génération Do It Yourself with a specific topic:

Latest episodes from Génération Do It Yourself

#257 - Ian Rogers - Ledger - Living in the Future: From Pioneering Music Streaming to Crypto and NFTs

“The older I get, the more I realize how skateboarding shaped who I am.” Ian Rogers definitely knows how to get out of his comfort zone to land a trick. The switch from innovative music streaming services (Apple Music) to taking luxury brands online (LVMH Group) was a bold one. A strong believer in growing from discomfort, Ian definitely sees opportunity rather than risk. One thing is sure, the man knows how to roll with the times without ever losing sight of his passions, from working with The Beastie Boys to collecting NFTs. Even though he'll tell you that “being early is the same as being wrong”, Ian is always on the edge of things with a unique sense of timing. The key to it all? Doing things with conviction and focusing on the future. Faster, better, stronger would be a good soundtrack! In this episode, Ian shares a few lessons from mentors and his time at Apple Music and LVMH: Get really good at saying no to good ideas, so you can get the important things done. (Apple Music) Focus on three things that will move the needle. (Tony Belloni, LVMH) Back creativity with operational efficiency. (Bernard Arnault, LVMH) Tailor your communication strategy to whoever you are trying to reach. Obsessed with what's next, Ian is way ahead of us and practically longs for the day his passport will be an NFT. In this conversation he tries to catch us up on what we're missing out on, and his latest big leap: Ledger. If “living in the future is cheating”, as the man himself claims, then he is damn good at it! TIMELINE: 00:15:49 : A career lived on the edge of things at the right moment 00:32:28 : Cryptocurrency and digital innovation into a household name like LVMH 01:15:43 : NFTs, building ecosystems and their own economy 01:53:50 : Using data for big groups 02:02:45 : Beats, Apple, LVMH and Ledger 02:22:50 : Being online, quitting social media (except for Twitter) Episodes of GDIY we talked about with Ian: #228 - Nicolas Julia - Sorare - Le tsunami français du WEB 3.0 : créer, posséder et échanger du virtuel #229 - Frédéric Montagnon - Arianee - Le WEB3 pour se réapproprier Internet #243 - Eric Larchevêque - Ledger - Le club secret des crypto millionnaires : bitcoin, transmission, savoir et slowlife Ian's reading recommendations: The Company, A Short History of a Revolutionary Idea, Adrian Wooldridge and John Micklethwait The KLF: Chaos, Magic and the Band who Burned a Million Pounds, John Higgs Stranger than we can imagine, John Higgs Please Kill Me: The Uncensored Oral History of Punk, Legs McNeil This is How They Tell me the World Ends, Nicole Perlroth The Emperor of All Maladies, Siddharta Mukherjee Show notes: Episode #86 - La Martingale with John Karp on NFTs Episode #100 - La Martingale with Jean-Michel Pailhon on NFTs “The Solitary Arts” Geoff McFetridge The Beastie Boys Book, Michael Diamond & Adam Horowitz, 2018 CU-SeeMe Twitter account : Web3 is going just great A Mashiro The World According to Punk 6529 - Raoul Pal Bright Moments exhibition Bandcamp PROOF - Kevin Rose Podcast with Matt Kane (Gazers) PROOF - Kevin Rose Podcast with Derek Edward Shloss (art collector) VeeCon Web3 conference The Defiant Ones, 2017 Supreme skateboard case by LVMH David Golberg at Yahoo & Sheryl Sandberg's late husband The Knowledge Project podcast- episode 68 Daniel Kahneman Bernard Arnault, LVMH Tim Cook, Apple CEO Jake Phelps, Thrasher Magazine Editor Nicolas Julia, founder of Sorare Éric Larchevêque, cofounder of Ledger Darius Rucker, Hootie and the Blowfish Ian Rogers NFT gallery Like the music credits? They are composed by Morgan Prudhomme! Contact him at: https://studio-module.com. Do you want to sponsor Génération Do It Yourself or partner with us? Contact my label Orso Media via this form. Special thanks to Olivier Le Garlantezec for connecting me with Ian. If you too want to protect your crypto assets, there is nothing better than a Ledger. Order yours now by clicking here. You can follow Ian on Twitter : @iancr

To discover the whole episode type in "#257 - Ian Rogers - Ledger - Living in the Future: From Pioneering Music Streaming to Crypto and NFTs" on your listening platform.